A Rock Crystal Ewer from Egypt

A Rock Crystal Ewer from Egypt 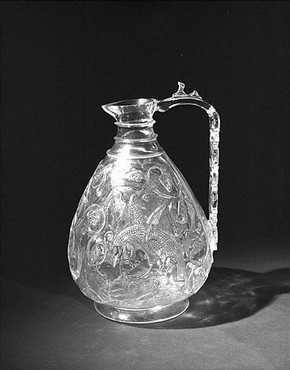 This ewer, or jug, appears at first to be made of glass or even ice. It was, in fact, made from a single piece of rock crystal which was carefully hollowed out, carved and polished. Rock crystal is the name given to a naturally occurring form of quartz, a mineral formed from silicon and oxygen. The pure quartz of rock crystal is colourless and transparent, and in the right conditions hexagonal quartz crystals of this type can grow up to a metre in length.

When the ewer was purchased by the Victoria and Albert Museum (V&A) in 1862 it was thought to be Byzantine (that is, made in the Eastern Roman Empire, in this case between AD 900 and 1100) but was later linked to a group of rock crystal objects made in Egypt in the Fatimid period (AD 969-1171). Three of these objects are inscribed with the name of a ruler or important Fatimid official, helping to date them to this time and place. The Fatimid period seems to have coincided with the height of rock crystal production in Egypt.

The Fatimids were a major power in the Mediterranean, ruling over North Africa, Egypt and Syria. On conquering Egypt they founded a new capital, Cairo, where they built mosques and palaces, making it one of the grandest and most glittering cities of the age. The arts flourished and the treasuries of the Fatimid rulers - the caliphs - became one of the richest the Islamic world has ever known. The preciousness of rock crystal objects made them prestigious items which a caliph would display in his treasury of prized possessions. A contemporary account of the treasuries mentions some 36,000 items of rock crystal and cut glass, including '90 basins and 90 ewers, of the clearest and best crystal'. This ewer is one of fewer than 180 carved rock crystals that have survived from this period, some of which are held within the V&A. During the political crisis that hit the Fatimid dynasty in the mid 11th century, the contents of the treasuries were dispersed around the Mediterranean basin, along trade and pilgrimage routes. Many ended up in church treasuries where they were prized as precious curiosities and were used to display holy relics.

Creating a ewer like this from raw rock crystal was a delicate operation requiring great skill. The body of the ewer is very thin (less than two milimetres thick on the undecorated part), making it very clear and light. We don't know exactly how objects like this were made but it is likely that the rough shape was first picked out using a saw and small hammer. A cyclindrical opening into the vessel could be made by boring into it using a cyclindrical tool attached to a bow drill, and an abrasive mixture of sand and water. The cylindrical core of rock crystal formed by the tool could be snapped off with a sharp tap to the tool leaving an opening into which steel wire or bamboo reeds could be inserted. These could then be used to hollow out the body by means of an abrasive such as emery, a hard, grey-black mineral. The maker had to be very careful not to make the crystal crack as he hollowed out the body and carved the delicate surface decoration. The whole object was then polished, inside and out, to create a glass-like appearance.

The talent of the maker is emphasised by the minimal decoration which leaves much of the clear, smooth, unblemished surface visible. The carved design on each side shows a bird of prey swooping down on a horned deer; a common visual reference to the power of the ruler over his people and his enemies. The style is consistent with medieval Islamic courtly art.