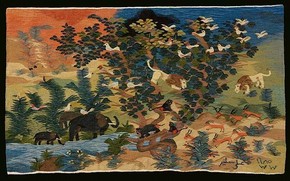 For many European tourists in Egypt a stop at the art centre in Harraniyyah is an essential part of their holiday experience. The centre, which was founded in 1952 by the architect Ramses Wissa Wassef, is now a prominent landmark on the cultural landscape of contemporary Egypt and its artistic products are popular with collectors, museums and galleries around the globe. This article highlights a Harraniyyah tapestry recently acquired by the Victoria and Albert Museum and considers its distinctive history and design aesthetic.

Despite its established reputation today, the art centre evolved from a bold piece of 1950s experimentation. Its founders, Ramses Wissa Wassef, his wife Sophie and her father, the educator Habib Gorgi, held a passionate belief in the inherent creativity of children; a creativity which they considered to be easily stifled by overly-critical parenting and teaching styles. They were also dedicated to the revival of traditional Egyptian crafts techniques such as pottery and weaving which they felt to be under threat from expanding industrialisation. In 1952 the Wassefs and Gorgi purchased a small piece of land outside the village of Harraniyyah, near the pyramids of Gizah, where they built a small studio in a traditional Upper-Egyptian mud-brick style. They selected several local children and provided each with a loom and locally-grown wool. The children were given no training in design skills and were encouraged to visualise their designs rather than make preliminary drawings in order to preserve the 'freshness' of their aesthetic vision. For the same reason, the woven portion of a child's work was kept rolled up so that the weaver wouldn't be able to see the whole until the textile was complete.

Design inspiration came in the form of day trips, outings and picnics but the children were also encouraged to draw deeply on their imaginations. No criticism was made of their work as developing the children's confidence was paramount. Slowly, a distinctive style emerged. The most common subjects were aspects of village life and the natural world. Fantastical, imaginary scenes and creatures also featured. These were depicted in bold colour, with wools dyed onsite using natural dyes according to the centre's emphasis on self-sufficiency.

Most of the committed weavers were female but in 1959 a twelve-year-old boy asked to join the centre. 'Ali Salim went on to become one of its best-known weavers. The tapestry recently acquired by the V&A was created by Salim. It is dated 1985 and includes the weaver's signature at the bottom right alongside the initials 'W.W' (for Wissa Wassef). On a label on the back, the maker's name is also given as 'Korayem Silem'. Typically, the tapestry depicts a scene from the natural world, 'Animals by the watering hole', in which elephants wade, baboons play in a tree, lions hunt their quarry (a herd of gazelles) and birds rest in the trees above. Despite its naïve style, the lively animals and the blocks of colour used to depict the trees, plants and natural landscape give the tapestry an energy and dynamism. The weaving technique is characteristic of the art centre's style which sought to produce 'woven paintings' rather than conventional tapestries. Instead of carrying the weft thread across the full width of the loom Salim has used the coloured wool only where it is needed. This has created an uneven tension across the tapestry and a slightly rippled surface.

The donor of the tapestry brought it from a Harraniyyah workshop the same year it was created. Given to the V&A in 2008, 'Ali Salim's piece offers a unique contemporary counterpoint to the Museum's important and extensive collection of Ancient Egyptian woven textiles.

Steele, James. The Hassan Fathy Collection. A Catalogue of Visual Documents at the Aga Khan Award for Architecture. Bern, Switzerland: The Aga Khan Trust for Culture, 1989. 22