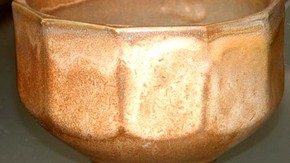 This stoneware bowl by the English potter Bernard Leach was given to the Victoria and Albert Museum by Lt-Colonel K. Dingwall, a generous supporter of the Museum, in 1926.

This bowl was one of Leach's favourites: 'I like this cut-sided pot as well as anything I have made'. It was illustrated by him in several significant publications, including his famous 'A Potter's Book', perhaps the most influential book on pottery making ever written, first published in 1940 and in print ever since, translated into a dozen different languages. But the qualities of this bowl were actually the result of an accident. 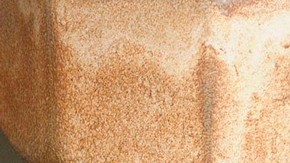 Leach was the founder of the British studio pottery movement, and one of the world's key figures in encouraging the development of small-scale craft production. His training as a potter in Japan 1910-20 is often seen as the foundation for his later success. But Leach faced considerable difficulties in establishing his pottery in St Ives, not least of which was finding fuel with which to fire his kiln – Cornwall being particularly short of woods and forests.

Leach explains: 'I was helped by the kiln: we were using some railway sleeper wood as fuel, not knowing that it contained salt-peter for preservation, and although many pots were thereby ruined, a few, including this one glazed with celadon, came out with a matted surface
and pleasant, warm discoloration.' 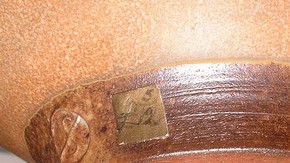 The bowl had received an accidental salt-glaze on top of the intended stoneware glaze. Leach's regard for this piece is clearly shown by the price he asked for it. The exhibition label still stuck to the pot records the very large sum of £12 - more than twice the weekly income Leach was hoping to earn himself in those days.