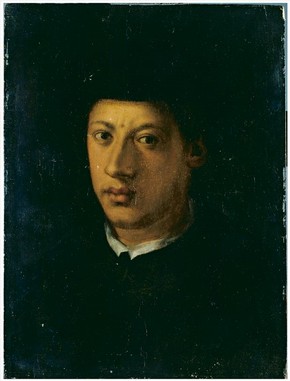 Both of the objects highlighted here feature Alessandro de' Medici (1511-37), the first Duke of Florence. It is thought that Alessandro's mother was a Moorish slave.

The Medici, an Italian family of merchants, bankers, rulers, patrons and collectors, dominated the political and cultural life of Florence from the 15th century to the mid 18th century. They were expelled from Florence in 1494-1512 and 1527-30. In 1530, after a long and bitter siege, the army of the Holy Roman Emperor Charles V conquered the city and backed the installment of Alessandro de' Medici as the first Duke of Florence. Alessandro's reign ended in 1537, when he was assassinated by his cousin and rival Lorenzino de' Medici. As he had no children with his wife (Margaret of Austria, illegitimate daughter of the emperor Charles V), and his illegitimate son Giulio was only four years old, Alessandro was succeeded by a member of another branch of the Medici family, Cosimo I.

Officially, Alessandro was the illegitimate son of Lorenzo de' Medici, Duke of Urbino (1492-1519), but it was rumoured that Lorenzo's cousin Giulio (later Pope Clement VII), had fathered him. Alessandro's mother, Simonetta, was allegedly a Moorish slave who had worked in the household of Lorenzo and his parents during their exile in Rome.

Although Alessandro's paternity was disputed, contemporaries acknowledged his maternal ancestry,
even nicknaming him 'Il Moro', the Moor. This term was (and is still) used in Italy to describe Africans and also Europeans with dark complexions or hair. But contemporary references to Alessandro's dark skin, curly hair, wide nose and thick lips, as well as visual evidence from surviving portraits, suggest that he was indeed of mixed heritage.

The slave status and possible African origin of Alessandro's mother are not surprising. Black Africans had been imported into Europe as slaves since 1440 onwards, when the Portuguese opened a new trade route between Mediterranean Europe and the west coast of sub-Saharan Africa. Many Italians, often from the maritime republics of Genoa and Venice, were involved in the trade, and in the 1460s there developed a fashion for using black African female slaves for domestic labour. These slaves were seen as symbols of status but also of the exotic new lands that were then being discovered.

Sometimes, there were sexual relations between female slaves and their masters or other freedmen. Florentine statutes of 1415 granted children born of such unions the free legal status of the father. However, Roman law, which applied across much of the Italian peninsula, stated that the legal status of a child followed that of its mother. Female slaves were therefore often freed by their masters so that their children would be free. After Alessandro's birth in Urbino, Simonetta was freed and moved to Colle Vecchio, near Rome, where she lived with her husband Lostensor (whose name may suggest that he was also of African descent) and their two children. 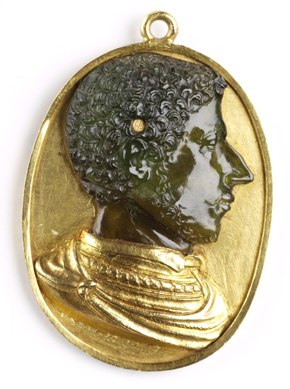 Like many freed Africans in Renaissance Italy, Simonetta lived in poverty. Letters that she wrote to Alessandro in the 1530s, asking for financial aid, reveal a stark contrast between her scanty means and the wealth of her son.

The cameo shown here, possibly made by Alessandro's court medallist and gem-engraver Domenico de' Vetri, bears a profile portrait of the duke, bearded and dressed in the style of a Roman emperor. The choice of green chalcedony may have been intended to represent Alessandro's dark skin and tightly curled hair. During the Renaissance, cameo portraits in the classical tradition were important as emblems of dynastic power. They  were highly prized by collectors and were often presented as gifts.

The painting of Alessandro, in which his dark skin and hair is visible, follows an earlier half-length portrait by the Florentine painter Jacopo Pontormo (1494-1556), now in the Philadelphia Museum of Art. The Philadelphia portrait shows Alessandro dressed in mourning for the death of Clement VII and drawing the profile of a woman in silverpoint. It was commissioned in 1534 as a gift for Taddea Malaspina, the mother of two of his illegitimate children, probably in commemoration of the birth of their daughter Giulia.

Alessandro had many enemies among Florentine exiles. They regarded him as a tyrannical despot responsible for depriving republican Florence of its liberty. Seemingly unconcerned with the ethnicity of his mother, they mocked Alessandro for his peasant status, even accusing him of poisoning her to hide his lowly origins. This suggests that people of African or mixed heritage who held positions of power, such as ambassadors and dignitaries, were less likely to be subjected to racial stereotyping than their poor or enslaved counterparts.

As the first of the Medici to be installed as a hereditary ruler of Florence, Alessandro has received surprisingly little study. Historians have criticised his rule for its severity, but contemporaries were more favourable. They commented on his political skills, spontaneous generosity and concern for the poor, as well as his informal style of leadership. Like other members of the Medici dynasty, Alessandro was also a patron of the arts.

His ethnicity has usually been ignored, perhaps because historians were uncomfortable with the fact that Alessandro's descendants married into eminent houses all over Europe. Writers who did acknowledge his mixed heritage judged him harshly, claiming that he was an unprincipled, sexually voracious seducer of aristocratic women. Hopefully, the recent academic interest in Alessandro will lead to an unbiased reassessment of his character, reign and significance in European history.