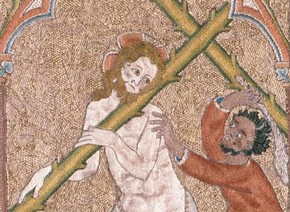 The textile is an orphrey, the decorative strip sewn on to the back of a chasuble, the garment worn by a Catholic priest when celebrating the Mass. The embroidery shows a black African beating Jesus with a club. The scene is one from the Passion, the period of Christ's suffering and death on the cross. There is no basis in the Gospels for representing Christ's tormentors as black.

The torturer may be shown as black to indicate his evil nature, his ignorance of the Christian message or perhaps to give a sense of impending doom. The colour black has long been used to evoke a negative image, and the colour white a positive one. In the later Middle Ages, the persecutors of Jesus were sometimes depicted as black, perhaps with exaggerated features, as were the Jews.

Images of the martyrdom of saints often showed the executioner as black. In this scene of the beheading of St John the Baptist (from the initial letter 'O' in an illuminated manuscript) the tightly curled hair of the executioner suggests that he may be black. 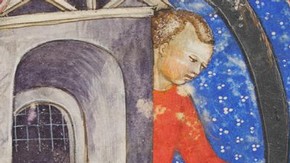 The colour black was also used for the depictions of the devil and demons that often featured in the visions of saints and monks. In medieval theatre, actors wore black masks to play demons, and in literature and folklore Satan went by a variety of names, including the 'black knight', 'black man', 'black Jehovah' and 'black Ethiopian'.

'Ethiopians', as black Africans were called by Europeans, were sometimes associated with the devil. However, not all textual references to Ethiopians or black Africans were demonic. In Europe, from the mid 14th to the early 15th century, a number of prominent religious figures, such as St Maurice of Magdeburg and one of the wise men, were increasingly depicted as black.