Annunciation to the Shepherds

Annunciation to the Shepherds 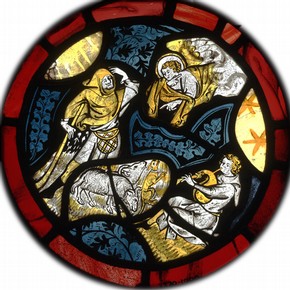 The Annunciation to the Shepherds, stained glass panel, about 1340. Museum no. 2270-1900, bequest of Henry Vaughan. The figures, drawn on plain glass with yellow stain, and the 'seaweed 'back-ground scratched on to blue glass together indicate a date around the middle of the 14th century. Several of the other pieces are not original.

The birth and childhood of Jesus Christ are recorded only in the Gospels of Matthew and Luke. Only Luke refers to the angel appearing to the shepherds to tell them of the miraculous birth. The shepherds then pay homage to the Christ Child. This latter scene is often contrasted with that of the Adoration of the Magi. The two events were interpreted respectively as the announcement of the birth of the Messiah to the Jews (the shepherds) and to the Gentiles (the Magi).

The design for this roundel is very similar to that of a manuscript dating from about 1325-35 that is now in The Hague, in the Netherlands. The manuscript is by an unknown artist who was making illustrations for a Flemish history of the world entitled 'Spieghel historiael'.

It is likely that this roundel and the manuscript share a common image source. The Hague manuscript depicts the Annunciation of the Birth of Mary to Joachim. The maker of the roundel adopted the same image elements - standing shepherd with fuller's staff, seated youth with chanter bagpipe ('chorus'), sheep with dog, angel emerging from clouds - and turned it into an Annunciation to the Shepherds.

The bagpipe depicted in this roundel is a 'chorus'. This simpler form was suited for use by a shepherd, and was probably used in the countryside well into the modern period.