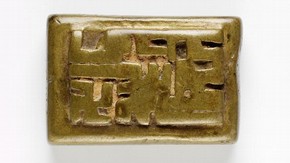 Goldweight, Asante (Ashanti), Ghana, 19th century. Museum no. CIRC.236-1971. Weight in the form of a plain rectangular block of brass with a worn raised geometrical pattern.

Natural gold resources in the dense forests of southern Ghana brought wealth and influence to the Asante (Ashanti) people. Asante wealth was increased by transporting gold to North Africa via trade routes across the Sahara. In the 15th and 16th centuries this gold attracted other traders, from the great Songhay empire (in today's Republic of Mali), from the Hausa cities of northern Nigeria and from Europe. European interest in the region, initially in gold and then in enslaved Africans, brought about great changes, not least the creation of the British Gold Coast Colony in 1874. British intervention also created public interest in the Asante and enabled British museums to acquire examples of Asante art. This article reflects on the presence of Asante objects in the collections of the
Victoria and Albert (V&A) Museum.

Goldweight in the form of a cartridge belt, Asante (Ashanti), Ghana, 19th century. Museum no. CIRC.84-1971. This depicts a modified version of cartridge belts worn by Europeans, with extra pouches and slits for holding knives.

Under the military leadership of the Asantehene (Asante leader) Osei Tutu, Asante State grew out of a group of smaller states to become a centralised hierarchical kingdom. In 1701 its increased power meant it was able to displace the then dominant state, Denkyira, which, through conquest, had come to control the major trade routes to the coast as well as some of the richest gold mines. Asante State then became regionally dominant and gold and slaves flowed through its state capital Kumasi.

Gold was central to Asante art and belief. At a political level, gold indicated the kingdom's dominance over rivals. Much gold entered the Asante court via tribute or
war and was worked there by artisans from conquered territories. The court's power was further demonstrated through its regulation of the regional gold trade. Everyone involved in trade and commerce owned, or had access to, a set of weights and scales. The weights, produced in copper, brass or bronze (usually by the 'lost wax' process), corresponded to a standardised weight system derived from North African, Dutch and Portuguese precedents. Other equipment included shovels for scooping up gold dust, spoons for lifting gold dust from the shovel and putting it on the scales and boxes for storing gold dust. 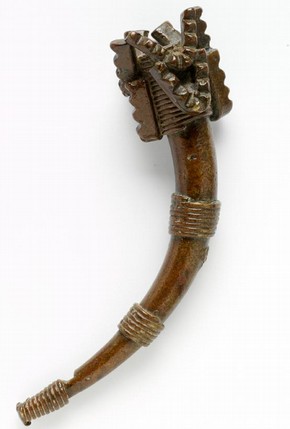 Goldweight in the form of an ivory warhorn, Ghana, 19th century, cast brass. Museum no. CIRC.82-1971

Geometric shapes and designs predominated amongst the early goldweights but more naturalistic representations of court regalia began to appear in the 17th century. By the 18th and 19th centuries the weights reflected a wide range of human and animal figures, often in scenarios designed to represent popular Asante proverbs. The V&A's collection of goldweights also includes a representation of a cartridge belt, reflecting the importance of guns to the Asante who acquired them from Europeans and used them to maintain, and extend, their rule. Typically, this weight also refers to an Asante proverb, literally 'The cartridge belt of Akowua [a celebrated warrior] has never been known to lack bullets',meaning a resourceful person may sometimes get into difficulties but he is never found wanting.

Goldweights are highly visual and easily portable, making them popular with visitors to Ghana, including colonial officers, who brought them back to Britain and later donated them to museums. The majority of the 15 goldweights in the V&A's collection were purchased in 1969 and 1971 from ethnographic and antique outlets in London. They were acquired for the collection of the Circulation Department which provided loan exhibitions to regional museums and colleges all over Britain. The department was disbanded in 1978 and the collections absorbed into the Museum's permanent collections, in this case that of the Metalwork department. 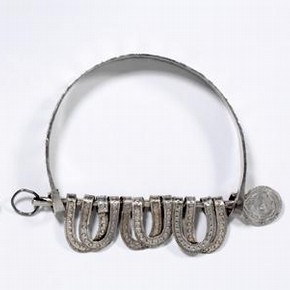 Pair of silver anklets, Asante (Ashanti), Ghana, before 1874. Museum no 380-1874. The shape of these anklets appear to resemble that of shackles, which may symbolically reflect the Asante wealth acquired through historic involvement in the transatlantic slave trade.

The V&A holds another group of Asante items which it acquired through very different means. In the 19th century the Asante were threatened by British traders and colonial officials who wished to end Asante control of coastal towns and trade routes. Asante State was one of few African states able to offer serious resistance to European colonisers. However its independence ended on 4 February 1874 when a British expeditionary force marched into Kumasi in retaliation for an Asante attack on El Mina two years earlier. The British ransacked the palace of the Asantehene, Kofi Karikari, and imposed an indemnity of 50,000 ounces of gold, part of which the Asante managed to pay by handing over gold beads and other worked jewellery. On return to Britain, some of this gold was auctioned by the London crown jewellers, Garrard's, to provide pensions for the wounded and next of kin. Garrard's is the source given for thirteen items of Asante court regalia acquired by the V&A in June 1874.

The V&A's collection includes a pipe, three pectoral discs (plus another acquired in 1883), a pair of silver anklets and a number of beaten gold pieces which were probably used to decorate state stools or swords. The discs - or akrafokonmu - were worn by court officials responsible for the ritual purification of the Asantehene's soul. The plural name for such officials is akrafo (literally 'soul people'), konmu refers to something worn around the neck but the term is usually translated as  'messengers' badges' or, more accurately, 'soul-washers' or 'soul-bearers' badges'. Pectoral discs were produced in cast and repoussé (hammered) gold, as well as gold leaf over wood. They are probably the most numerous of all regalia and represent a substantial portion of an Asantehene's wealth. 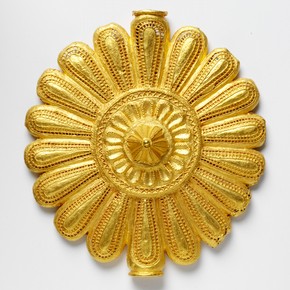 Pectoral disc, Asante (Ashanti), Ghana, before 1874 , cast gold. Museum no, 369-1874. The distinctive multi-petalled shape of this disc represents the bud of the fofoo plant before it opens to reveal yellow florets.

Gold regalia often featured in the reports of admiring European visitors to the Asante court in the early 19th century. In 1817 the British envoy Thomas Bowdich spent three months in Kumasi where he received a state reception. He left a vivid description of the richly ornate court of the Asantehene Osei Bonsu, noting how

. . . the royal stool, entirely cased in gold, was displayed under a splendid umbrella, with drums, sankos [harp-lutes], horns and various musical instruments, cased in gold, about the thickness of cartridge paper; large circles of gold hung by scarlet cloth from the swords of state, the sheaths as well as the handles of which were also cased; hatchets of the same were intermixed with them; the breasts of the Ocrahs [soul-washers], and various attendants, were adorned with large stars, stools, crescents, and gossamer wings of solid gold.'

However the British view of the Asante people changed considerably as the 19th century progressed and struggles for trade dominance intensified. A special edition of the Illustrated London News published on 26 March 1874, 'From Cape Coast to Coomassie: An Illustrated Narrative of the Ashanti War', reflects this change. Illustrated by war artist Melton Prior, the images show uniformed, well-armed British soldiers contrasted with cowering semi-naked Asante people fleeing a burning Kumasi. The display of 'A collection of gold and other objects from Ashanti at the South Kensington Museum' (later the V&A) in the same year was probably presented in the same spirit of triumphant imperialism. The display included the 'umbrella' (state parasol) of Kofi Karikari, loaned by Queen Victoria. It was hugely popular and much reported on in the press at the time.

Despite their enduring and active resistance, on 1 January 1902 the Asante people became a British protectorate. In 1926 the Asantehene was given ceremonial control over Kumasi and in 1935 the full role was restored but limited to ceremonial functions. Today, post-independence, the Asantehene continues to be an important cultural figure and patron of the arts. While he still has political power, it has been superseded by democratically elected leaders. It is estimated that Asante people form 14% of Ghana's population. This, along with their history, makes them very influential both politically and economically. The current president John Kufuor is Asante.