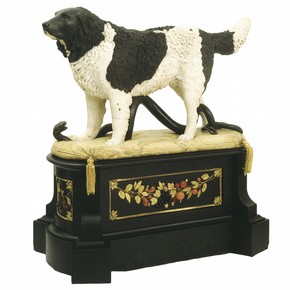 This magnificent portrait of Bashaw, Lord Dudley’s favourite dog, was an extravagant commission, but the sculptor never received his payment, as Lord Dudley died before it was completed. Lord Dudley commissioned the portrait in 1831, from the sculptor Matthew Cotes Wyatt (1777–1862). He wanted not only a portrait of Bashaw, but also a great work of art. Money no object, Bashaw was taken about fifty times to sit for Wyatt at his London studio. Lord Dudley searched through family jewels and chose a combination of Persian topaz and sardonyx for his eyes.

Unfortunately, Lord Dudley died in 1833 before the sculpture was completed and his executors refused to pay Wyatt the five thousand guinea fee. It had been an extravagant commisson: a full-length marble statue of a man by the eminent sculptor Sir Francis Chantrey, for example, would only have cost about three thousand pounds.

In his own lifetime, Wyatt’s sculpture of Bashaw was enthusiastically received. When it was exhibited at Wyatt's studio in 1834, the Court Journal declared that 'the work must be regarded as a triumph of art', while the Literary Gazette judged it 'the most elaborate representation of a quadruped ever produced by ancient or modern art...singularly effective, magnificent and unique'. It was also a popular exhibit at the Great Exhibition of 1851, with the title The Faithful Friend of Man Trampling Underfoot His Most Insidious Enemy. 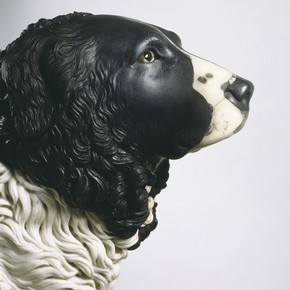 Remaining unsold at the sale of Wyatt's effects, Bashaw became the property of the sculptor's son James. In 1870, he lent it to the South Kensington Museum (now the V&A). This time, the critics were not all in favour of Bashaw. John Ruskin scathingly wrote in a letter dated May 1871, 'It showed that the persons who produced it had seen everything, and practised everything; and misunderstood everything they saw, and misapplied everything they did … and misunderstanding of everything had passed through them as the mud does through earthworms, and here at last was their worm-cast of a Production.'

Bashaw was also criticised in the Art Journal in January 1870: ‘The great placid beast is trampling with calm indifference on a bronze serpent, ingeniously contrived to form a support to the body of the oppressor…We are glad to learn from the label that this work is only on loan.'