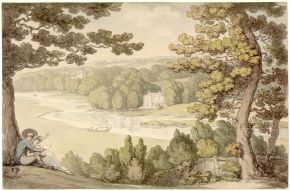 The rise of watercolour painting in Britain was closely tied to a growing acceptance in 18th century Britain of 'landscape' as an appropriate subject for painting. In the 1620s one writer, Edward Norgate, noted that landscape was an art so new to England that he could not 'find it a name'.

A hundred years later a taste for landscape was encouraged by two established traditions, the Dutch and the Italianate. Dutch 17th century landscape painting recorded and celebrated the contemporary Dutch landscape. Italianate landscape painting was characterised by two 17th century French painters who worked in Italy, Claude Lorraine and Nicholas Poussin, whose paintings imagined a distant classical past. British aristocrats admired such classically inspired landscapes because of their associations with the Roman texts which formed part of their education.

The culmination of a young gentleman's education in the 18th century was the 'Grand Tour' of Europe, particularly of Italy, which often encouraged a taste for such landscape art. Claude's paintings particularly haunted the British imagination, their sun drenched views of Italy echoing the tourists' nostalgic memories of their youthful travels. 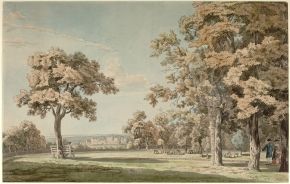 The careers of three early English watercolour artists illustrate the driving forces behind the development of watercolour painting in the 1750s, Paul & Thomas Sandby, and Thomas Malton II.

Paul and Thomas Sandby came to London in 1742 to work at the Tower making military maps. Paul was appointed draughtsman to the Survey of the Highlands in 1746, and his etching of a survey team in mountainous terrain clearly records this period of his life. Thomas Sandby was appointed draughtsman to the Duke of Cumberland and served in various army campaigns. He finally became Deputy Ranger of Windsor Great Park, and acted as architect, landscape gardener and topographical artist, as seen in 'View of Windsor Castle from the Great Park, near the End of the Long Walk'.

Thomas Malton II studied architecture and is best known for his published views of London and Oxford, with their architectural emphasis. Topography, the record of a specific place, was the major source of employment for these early watercolour artists. The demand for topography was fuelled by a number of factors: the traditional military need to record the geography of a land; the interest of owners of country estates in recording their houses and grounds, for example, 'A Country House and Park' by Malton, and the print trade, which fed the growing market for images of places of public interest. Paul Sandby even made his own prints, particularly in aquatint which could mimic the tonal qualities of watercolour. For example, a 'View of Windsor Terrace looking Westward'.

Landscape painting in the 19th century 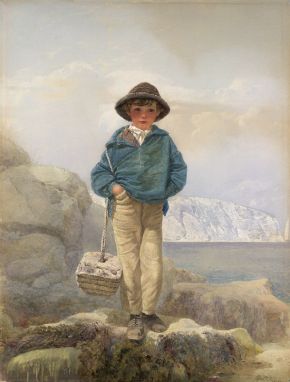 The rise of landscape painting in the 18th century encouraged the related field of genre painting: the portrayal of scenes from ordinary life. The inclusion of figures to enliven landscape meant that some rural scenes were often borderline between the two categories, for example Myles Birket Foster's 'The Milkmaid'.

The Victorian period (1837-1902) saw an explosion in genre, and particularly that devoted to children. The family, with the child at its heart, was a major icon of the time. At the same time industrialization gave rise to polluted, overcrowded cities and a growing nostalgia for the simplicity of life in the country and the imagined blissful state of childhood.

'there is much in the occupations and amusements of our peasantry, and more especially of their children, to call the artist into their society...Who can deny the superiority of his [the rural child's] lot - even with all its poverty - to those cribbed and confined in pent-up cities or overgrown towns, where the Industrial Arts flourish?'.

Again the 'Annuals', the illustrated magazines with their stories and poems, encouraged this taste. Tellingly it was said of one artist specialising in genre 'he presents the ideal of all a tired citizen would wish to behold when enjoying his annual holiday'.

Patriotism also encouraged such genre. Alfred Downing Fripp's 'Fisher Boy' of 1860 is subtitled 'Young England', and it is notable that the Crimean war had ended only a few years before. The year this was painted, Blackwoods Magazine commented, 'Painters dream not of anything so unpictorial as extended suffrage and vote by ballot. They go into the lanes and rural homes of what once was, and still is happy old England'.

Learning to look - landscape and the imagination 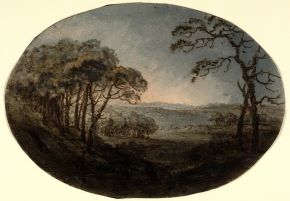 From the 1750s drawing increasingly formed part of the education of both gentlemen and ladies, as seen in Thomas Rowlandson's 'The Country House'. Many watercolour painters were also drawing masters, and encouraged students towards a taste for landscape painting. 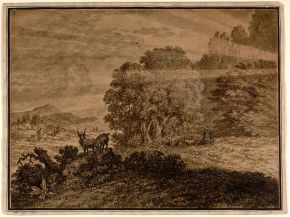 William Gilpin was one of a number of 18th-century writers who sought to analyse, define and order experience. From 1782 Gilpin published his 'Tours' of Britain, in which he codified what he defined as the 'Picturesque' in British landscape, literally those elements of a landscape which could form an appropriate landscape painting; for example Gilpin's 'Landscape'. By following Gilpin's illustrated Tours 18th-century travellers learned to look at the British countryside as an interesting subject for painting. We see this mind-set in the 'Claude glass', which travellers used to reflect actual landscapes as if seen in a painting.

The search for the Picturesque in landscape, using Gilpin's 'grammar' as a guide, was so popular that it became the subject of satire; particularly William Combe's 'Tours of Dr Syntax in Search of the Picturesque', which was illustrated by Thomas Rowlandson.