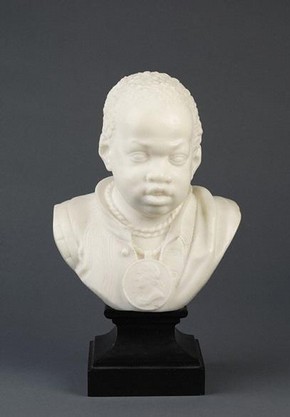 This early 18th century marble bust of a black boy in the Victoria & Albert Museum's (V&A) collections is an intriguing object which asks more questions than it answers. Does the bust depict an individual or is it meant to suggest a type of person? Why, when busts in Europe were usually reserved for the white and wealthy, was a black child depicted? Who was the bust made for? What is the meaning of the large medallion the child wears? Whose face is shown in profile upon it?

There are questions, too, about the identity of the person who created the bust. The features of the boy and the way in which he has been depicted show similarities with a sculpture in the Rijksmuseum, Amsterdam. The Rijksmuseum sculpture is also of a black boy, on this occasion standing. He is naked except for some elaborate strapped footwear, a strip of drapery and other accessories including an unusual fortress-shaped crown. The figure is signed 'JOANNES CLAUD DE COC …. Anno 1704', making it possible that both sculptures are the work of the Flemish artist Joannes Claudius de Cock (1668-1735). Another possibility is that the V&A bust is a later work inspired by the de Cock figure.

Any attempt to positively identify the bust as the work of de Cock is made more difficult by the fact that at least ten versions are known to exist in public and private collections. The history of most of the versions can be tracked back only as far as the early 19th century suggesting that at least some are later copies. The busts vary in material from coloured marble to bronze. All - including the standing sculpture in Amsterdam - have a medallion hanging from the boy's neck which shows a face (usually of a white man) in profile. Often this face appears to be in the style of a Roman emperor.

Joannes Claudius de Cock spent much of his working life in Antwerp. From the mid 16th to the mid 18th century Antwerp was the most important centre for sculpture in the Low Countries. This period also witnessed Antwerp's rise to international trading centre - by 1560 it was the second largest city north of the Alps - and its subsequent crash as religious upheavals under the Spanish king Philip II caused a swift decline in the city's fortunes. Almost half of the population of Antwerp emigrated. Trade was also affected by custom dues imposed by the United Provinces of Holland (now the Netherlands) which from 1585 controlled the Scheldt estuary, the city's main outlet to the sea. Nevertheless Antwerp continued to flourish culturally. In particular, sculptors found plentiful work as church interiors began to be renovated and refurbished after the destruction and iconoclasm of the Reformation.

De Cock initially worked as an apprentice in the Antwerp workshop of Pieter Verbrugghen the elder and then, following the death of Verbrugghen the younger in 1691, as an independent master. After a period spent decorating the courtyard of the palace in Breda for King William III, Stadholder of the Netherlands, de Cock returned to Antwerp, where he established a large workshop. Like many of his counterparts, de Cock worked on both religious sculpture (such as altars, pulpits, confessionals, choir stalls and tombs) and secular (garden statues, monuments).

De Cock's choice of a black subject for the standing figure and (possibly) bust may be unusual, but African people, particularly young men and boys, were not an uncommon sight in cosmopolitan Antwerp. The city's historic trading links and increasing involvement in the transatlantic slave trade contributed to the growth of a black community. Some members of this community worked as domestic servants, and over the course of the 18th century it became a sign of fashion and status to 'employ' (usually without pay) a young black page. Nothing is known about the original owner of this bust or how it was displayed but it is possible that it was intended to provide a sculptural substitute for a fashionable black page. However, if that is the case, there is nothing of the air of condescension or caricature which so often accompanied such depictions. The degree of naturalism shown by the bust might even suggest that it was intended to serve as a memorial to a particular individual although this seems unlikely in the absence of an inscription giving the subject's identity and the number of versions in existence.  While many questions remain unanswered, including the reasons behind its creation, the bust remains to us today as a vivid and tangible reminder of the early black presence in Europe.