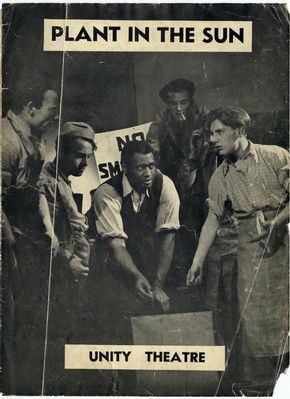 At the turn of the 20th century, black musicals such as 'In Dahomey' became the rage in both New York and London, bringing with them new dance crazes such as the Cakewalk and the Charleston.

Many performers from overseas were successful in England at this time, including  the tragic Florence Mills who became the darling of London Theatre before her death aged only 31. Carlton Bryan, a Jamaican actor and comedian, starred in the 1913 revival of Uncle Tom’s Cabin. Indian dancer Uday Shankur became immensely popular after partnering the famous ballerina, Anna Pavlova, bringing Indian classical dance to European and UK audiences.

Black British stars also began to make their name on the London stage. In 1928 'Showboat' opened at the Drury Lane theatre. Based on Edna Ferber's sprawling novel of life on the Mississippi, the show brought a new depth to musical theatre of the time by dealing with difficult topics such as unhappy marriages and racial prejudice.

Social issues of the 1930s pre-war depression era led to the formation of Unity Worker's Theatre. Unemployment was high, fascism was on the rise in Germany, and Britain saw the formation of a fascist movement under Oswald Mosely. Unity's volunteer members converted an old chapel in Goldington Street, NW1, to stage plays on social and political issues (including black issues) to growing audiences. 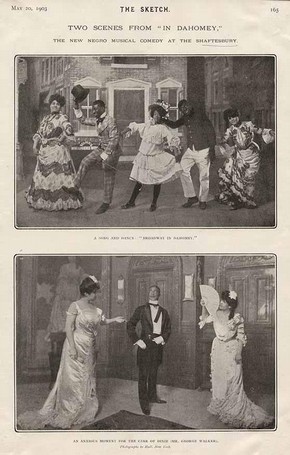 Two scenes from 'In Dahomey', The Sketch magazine, 1903

American actor Paul Roberts turned down a West End show to appear in Unity’s anti-strike play, 'Plant in the Sun' in 1938. He was to become one of the century’s most famous actors but fame didn't prevent his American passport being removed as a result of his commitment to left wing.

'In Dahomey' came from New York to London's Shaftesbury Theatre in 1903. It was a huge success and the 'Cakewalk' and 'Buck and Wing' dances featured in the production became the latest dance hall crazes in the UK.

In 1903 the show was booked for a Royal Command performance to celebrate the birthday of the Prince of Wales. A huge temporary theatre was constructed in the grounds of Buckingham Palace.

Legend has it that two of the company members were sorting out props when a man in a red waistcoat appeared and enquired how the show was progressing. One of the members, who was having a particularly bad day, proceeded to tell the man about everything that was wrong with the tour, the weather and England itself. When the show opened in front of the Royal family later that evening the company member realised his mistake - the man in the red waistcoat was the King! 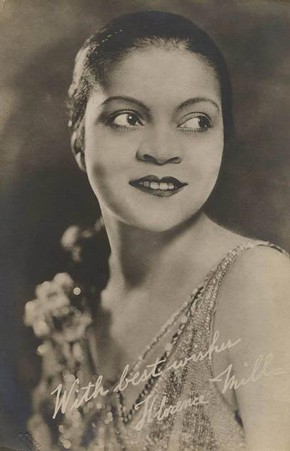 London first saw Florence Mills in 'Dover Street to Dixie', a revue from the showman CB Cochran in 1923. There had been rumours that an 'anti-coloured' demonstration was planned, but after one song London was at her feet. Cochran later presented her in the smash hit black revue 'Black Birds'.

She was born in 1895, to ex-slaves in a Washington, D.C. slum. By the age of four she was performing on stage. By the 1920s she was the toast of Broadway and London and the first black woman featured in Vogue Magazine. She became a role model and her success helped audiences accept black performers. Her trademark song, ‘I'm a Little Blackbird Looking for a Bluebird’ was a protest against racial inequality.

Audiences loved Mills. She was said to never woo a crowd overtly, but always manage to create wild enthusiasm in them.

Cochran considered Mills one of the greatest stars he ever presented, he remembered her voice as 'bird-like, with a throb in it such as I have never heard in any other. In her quietest moment her eyes would suddenly flash, her beautiful little vibrant face would light up, and her frail, lithe limbs would become animated with a sort of dancing delirium’.

Mills died in 1927, aged only 31. At her funeral the mourners sang her hit song - ‘Bye Bye Blackbird’ 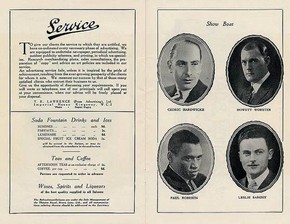 Show Boat combined the talents of Jerome Kern and Oscar Hammerstein II, and was based on Edna Ferber's sprawling novel of life on a floating theatre on the Mississippi. It opened in New York in 1927 and ran for 572 performances. The British production opened at the Drury Lane theatre, London, in 1928.

Show Boat, with its issues of racial prejudice and unhappy marriage, showed that musical theatre could deal with serious subjects while remaining entertaining.

The play takes place on the show boat, 'Cotton-Blossom', a floating theatre that travels up and down the Mississippi, stopping to put on performances along the way. Magnolia Hawks, whose father owns the 'Cotton Blossom', marries gambler Gaylord Ravenal, but he gambles away all their money and they separate.

The subplot involves Magnolia's mulatto friend (a person having one white and one black parent) Julie La Verne, who is forbidden to perform when her parentage is revealed. One key scene shows Julie's white husband sucking her blood so that he can claim he has 'coloured blood' in him and thus 'legalise' their marriage according to the laws of the state.

The great American actor and singer Paul Robeson played a minor role, singing the song 'Ol Man River'. All the reviews singled him out, one claiming that he and the other black member of the cast, Marie Burke, ‘towered above everybody else on the stage in their suggestions of character and atmosphere’. 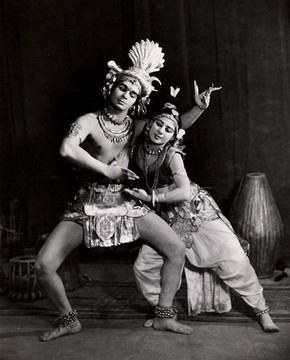 This photograph of Uday Shankar and his leading dancer Simkie was taken during a season at the Gaiety Theatre in London in 1937.

It shows the expressive use of the face, especially the eyes, and the stylised hand movements called 'mudras', which are used to express the action and emotion of the dance.

Simkie often danced with Shankar in the 1930s. She was, in fact, not Indian by birth but a French girl who took the Brahmin faith.

Shankar not only revealed Indian dance to the world, he revitalised it and gave it a new status in India itself. In 1938, he founded the India Cultural Centre in the Himalayan foothills as a school and study centre for all aspects of Indian dance.

The great American actor and singer Paul Robeson was a major pioneer among black performers in the first half of the 20th century.

He visited Britain several times in the 1920s and 30s, starring in a number of films and appearing on stage in London and with the Royal Shakespeare Company in Stratford upon Avon. He also had a minor role in the first british production of 'Showboat', stealing the show with the song 'Ol Man River'.

In the 1930s, he appeared in 'Plant in the Sun' by Ben Bengal, staged by Unity Workers' Theatre. The story followed a group of teenagers in the shipping department of a New York sweet factory who hold a sit-down strike when one of them is fired for 'talking union'.

Robeson played Peewee, the sacked 19 year old, and despite his star status he refused special treatment, insisting on taking turns to sweep the stage with the other actors. He had turned down several lucrative offers for this unpaid part in 'Plant in the Sun', as the rest of the company were amateurs with day jobs.

The play deals with issues of solidarity across divisions of class, race and gender. These issues were important to Robeson who, though he became a star, was determined not to forget his past. He was the son of a slave who had escaped and become a preacher, and Robeson remained committed to supporting the struggles of working people and the disenfranchised throughout his life.