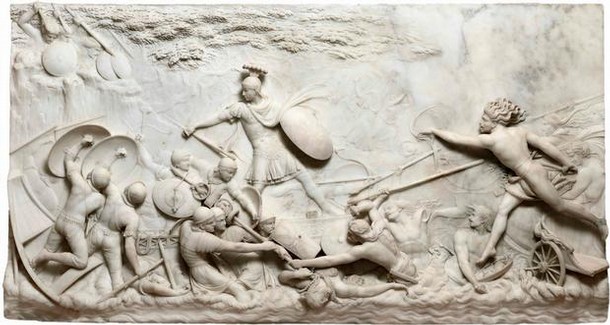 In October 2011, the V&A acquired this large rectangular relief, Caesar Invading Britain, carved by John Deare in Rome between 1791 and 1796 and signed 'I Deare Faciebat Romae 1796'. There are no other marbles by Deare in British public collections

John Deare's artistic standing, until recently undervalued, has in the last few years been reassessed. He should certainly be seen in the same light as Thomas Banks and John Flaxman, and his virtuoso technique, inspired by both classical and Renaissance models, surpasses both. Caesar Invading Britain displays his astonishing technique and narrative mastery and can justly be considered as one of his two major masterpieces, alongside a large marble relief showing the Judgement of Jupiter, now in the Los Angeles County Museum of Art.

The relief was commissioned by John Penn, grandson of William Penn, the founder of Pennsylvania. It was delivered to Penn's Stoke Park in Buckinghamshire in 1796 and remained there until the middle of the last century, when it was moved to the neighbouring Stoke Manor, a private house. Following building work, the relief was moved with Listed Building Consent and can now be enjoyed by the general public.

Purchase funded by the Vladimir Caruana and Ivan Booth Bequest