Conservation of objects for the 'Arts of Thailand' display 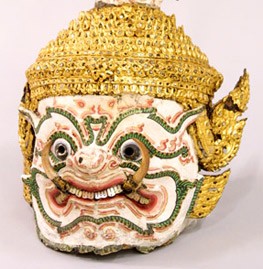 This article highlights a selection of the conservation treatments implemented and examples of the rich decorations and techniques that can be found on these fascinating artworks from Thailand.

The survey of such wide array of materials and manufacturing techniques needed the involvement of specialists from all the conservation studios. With their expertise, the correct assessment could be made of the condition of objects and the required treatments to stabilise them or improve their appearance.

The studios also provided advice on methods of display and appropriate environmental condition including lighting and relative humidity levels. 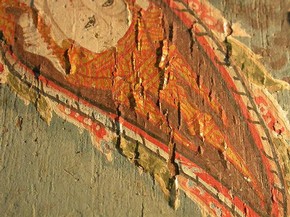 One of the most complex treatments was that carried out on two panel paintings. These panels were painted in gouache on wooden boards depicting scenes from the last ten of the Buddha's former lives or Jatakas (Thai Thotsachat).

Both paintings were in very poor condition. The paint was very fragile, brittle and lifting, in areas the flakes of paint were raised in peaks. None of the usual methods to reattach paint could be used, as any pressure or moisture would have crushed the raised flakes.

Additionally, an adhesive was needed that would not stain the matt paint surface or leave it glossy. A solution was developed to solve the problem and the fixing of the paint was undertaken in three different stages. 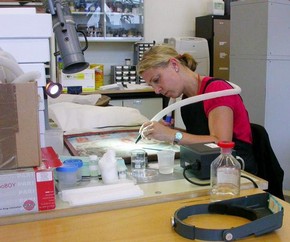 First of all the paint was patiently treated with an ethyl cellulose solution in a very fine ultrasonic mist using a nebulizer. This treatment softened the paint very slowly and gently and made laying the flakes down possible. The area was then left briefly under the pressure of tiny sand bags.

In the next step a stronger ethyl cellulose solution was fed with a brush underneath the loose fragments of paint.

Finally in the third step an adhesive which had more body, was needed to ensure the adhesion between the paint / ground layers and the wood. An aqueous dispersion of an acrylic copolymer with a very low viscosity was chosen, as it flowed nicely beneath the paint layers. 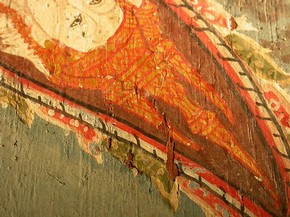 Having secured the paint, the dirt on the surface could be removed [Museum no.IS.38-2005]

As the paint was too vulnerable to be touched with a wet swab, a special cleaning sponge was used to reduce the surface dirt. It could absorb the loose dirt without wetting the paint surface too much.

Finally a few areas where the white ground was exposed were retouched with watercolours.

The display has a large representation of metal objects some of which needed conservation including bowls, vessels, containers, jewellery and small statues. The metals range from alloys of gold, silver, copper to iron. The majority of the objects incorporate additional materials including glass, fragments of mirror, enamel, diamonds, shell, black coral, niello, and lacquer. 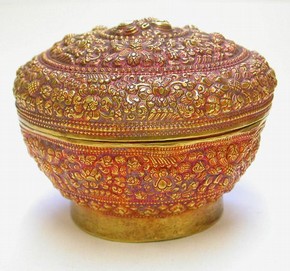 Example of the use of tamarind pulp to create a tint on the surface of gold repoussé work [Museum no. IM.49-1937]

Decorative motifs are present on the surface of these objects which were achieved by several metalworking techniques including stamping, chasing and repoussé.  Some of the gold objects show a particularly unusual manufacturing process, which involved the application of tamarind pulp to create a tint on the surface ranging from yellow-orange to red to magenta.  Further decoration techniques can be observed on a selection of copper alloy Buddhist figures with applications of gold leaf, lacquer and pigments.

The conditions of the objects ranged from those which were recently displayed and required little treatment, to those which may not have been previously displayed.

In all objects, fingerprints, surface dirt and dust were removed using materials and processes tailored to the individual object, governed by its materials, manufacture, and condition at the time. 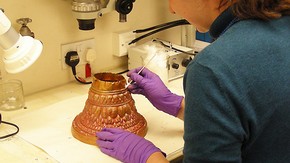 Active corrosion occurred in areas on the copper alloy and steel objects; it was removed using mechanical rather than chemical methods to preserve the original surface and its stable patina. Tarnish, which had formed in uneven patches on the silver and silver gilt objects, was also removed. Silver is often lacquered at the V&A to prevent the necessity of frequent cleaning, a process which wears the surface over time. Where previous lacquer coatings were damaged, the exposed silver surface had tarnished.

In these instances, old coatings, which may also discolour over time, were removed, the tarnish was removed, and the object was re-coated with a fresh lacquer layer. 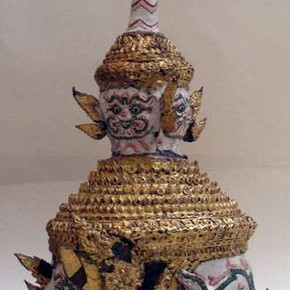 The surface paper of the dance masks was loose along the edges [Museum no. IM.44-1939]

Further types of sculptural objects included in the display are stone carved heads and two beautiful papier-mâché dance masks with applications of paint, mirrors, mother of pearl, and ivory. The stone heads were structurally stable and mounted on stone socles with metal dowels. The only intervention was to remove the superficial dirt deposits by a dry cleaning method using a synthetic rubber sponge which captures the dirt without leaving residues.

The surface paper of the dance masks was loose along the edges. These areas were consolidated with wheat starch paste preventing further losses and facilitating their handling.

The little mirrors on the head dress were cleaned with saliva moistened swabs, re-adhering the loose ones with a copolymer emulsion specific for paper. 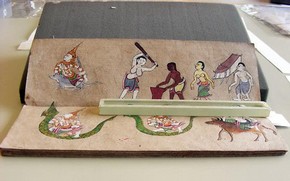 An astrologer's book was also conserved for the display. This manuscript had its front cover and back page detaching as well as tears and minor losses throughout. There were some past losses of pigment and water damage but the pigment was stable.

The cover was re-attached by inserting a piece of toned repair paper into the paper layers of the cover and to the back of the first page using a reversible adhesive. The tears were strengthened in a similar fashion and the minor losses were supported and infilled with a toned light weight tissue. The last page was re-attached as described previously infilling the losses with a paper of similar thickness and tone as the original.

Beyond the practical treatments the objects needed to be considered for their long term preservation. For instance the panel paintings, the dance masks, and the astrologer's book have pigments sensitive to fading, delicate aqueous medium and other vulnerable materials. Therefore different lighting levels were established for their different locations in the display. In addition a system of rotation was put in place where the paintings and masks would be on display for six months only and then replaced with similar objects. In the case of the book the page would be changed every year.

All this combined effort and expertise from the different conservation studios is essential towards the successful completion of the display projects at the V&A. A great example of this is the display 'The Arts of Thailand'.