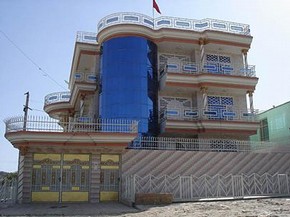 Photograph of an example of contemporary architecture in Kabul. © Jemima Montagu

Cities, like ideas, have a way of surviving. Resisting the ravages of war, speculative development and functional change they somehow persist, and when the conditions are right, they come back to life. Kabul is such a city - a place of rich history, which fell into decades of war and destruction, it is now rebuilding itself again. The population of Kabul has grown rapidly and the economy of the city continues to expand.

Afghanistan is fortunate to have traditional Islamic cities which are almost unique in the world. In each city, layers of Persian, Hellenic, Central Asian and Islamic architecture take the form of traditional houses, baths and shrines. Afghanistan has unique traditions in tile-work, incised and lattice woodwork, plasterwork, masonry, pottery, metalwork, music, glasswork, calligraphy, carpet weaving and embroidery. These are under threat, both in terms of the destruction of historic buildings, and in the lack of trained craftsmen. The oldest areas of the city, where important examples of these historic traditions can be found, are now often the poorest, with impassable streets filled with sewage and waste, and homes that lack basic services. The fall of the Taliban in 2001 has ignited a property boom, and in Kabul and Herat developers are demolishing sections of the traditional city to construct concrete shopping malls and western villas. 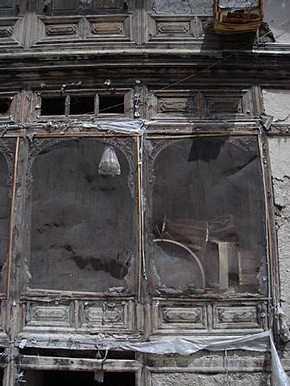 The Turquoise Mountain Foundation is carrying out a project to restore a series of traditional courtyard houses and buildings in the Murad Khane area of Kabul. By using traditional materials of mud brick and plaster, and replacing lost and damaged timber and plasterwork, they are seeking to continue traditions in danger of being lost. The Foundation has established schools in Kabul to teach traditional woodworking, carving, ceramics plasterwork and calligraphy to Afghan apprentices. The traditional architectural elements needed for the restoration of the buildings of Murad Khane will be fabricated in the school’s workshops.

The Foundation is preparing a provisional development plan for the Murad Khane district, which considers infrastructure, social histories, and commercial growth as an integrated urban proposal. This will be used to demonstrate how a modern city could emerge with integrated heritage conservation as part of its contemporary character.

As much as this is a project about conservation, it is also about the identity of a contemp orary Muslim city. This is an identity where a modern post war central Asian metropolis, with all the demands of growth and infrastructure, emerges alongside the preservation of its heritage, its social and urban history.

This report has been put together by Jemima Montagu, of Arts Council England, and Shahed Saleem, of Makespace Architects, both of whom have been involved in the Turquoise Mountain Foundation 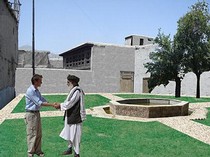 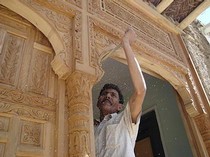 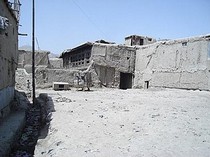 Many examples of contemporary Islamic architecture consist of small interventions into the existing urban fabric, often simply transforming an existing building. The three projects presented here are by Makespacearchitects, a young architectural practice based in East London. Makespacearchitects have built and developed designs for a variety of different kinds of building, usually at a small scale. Their urban interventions often involve close engagement with local communities.

The projects here have been chosen by one of the partners at Makespacearchitects, Shahed Saleem. These new mosque projects are sited in London's inner cities; in Hackney and Bethnal Green in the East End, and in Lewisham in the south. They are each at different stages in the design process and each is a negotiation between the communities' expectations, the requirements of local planning policies, and the architects' aesthetic and cultural vision. Each project is presented alongside an image of its original site, showing how the mosque transforms and impacts on the existing urban fabric.

Mosque committees often have particular expectations of what a mosque should look like. These ideas are often rooted in certain interpretations of Islamic history, which centre on the architectural elements of the dome and minaret. The form of these elements and the style of their decoration has varied through Islamic history, depending on which culture implemented them. Makespacearchitects believe that an indigenous European Islamic architecture is a continuation of this process of interpretation and reference to tradition. As there are no actual requirements of what a mosque needs to be, other than the prayer being oriented towards Makkah, the formal responses are open to interpretation and suggestion. It is important to refer to elements that people perceive as traditional, as the mosque has to have meaning for the people that use it as well it being a symbol for the ongoing evolution of the Muslim world, of Islamic tradition, and of the diversification of British society. In this sense the mosque negotiates between all of these aspirations and represents a complex set of local and global patterns and so is a unique and exciting building type on the British urban landscape and architectural scene.

Mosque building in London is a sensitive and intricate process. As architects, the team at Makespacearchitecture are negotiating the complexities of London's urban fabric, the desires and politics of a mosque community, the weight of Islamic architectural history, and demands of rapid cultural change. 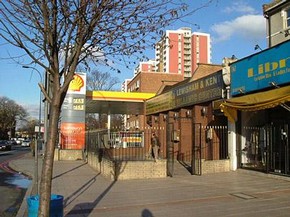 The project for Lewisham mosque is a redevelopment and extension of the existing building which is currently being used as the mosque. The current building is a former nightclub at the end of a fairly ordinary Victorian terrace, and the challenge was to create a larger mosque facility, and to respond to the existing architecture of the street.

The proposal forms an end to the terrace with a larger landmark building, which will identify the mosque and provide a local point of reference. The planners were very supportive of the proposal and design as they wanted to create a local landmark and an identifiable mosque building to reflect the diversity of the borough.

The mosque committee were keen to use elements which would be identifiably Islamic, and for this suggested domes and minarets. The architects' aim was to take these traditionally recognised Islamic elements and interpret them in a way which referred to the aesthetics and materials of contemporary British architecture. They also took the traditional courtyard layout of the mosque as an organising principle of the ground floor plan. This incorporated a covered and glazed courtyard at the front of the building, which can be used as a public space for community events. It also acts as an intermediate space between the street and the prayer spaces. 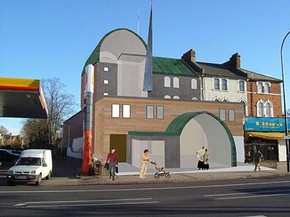 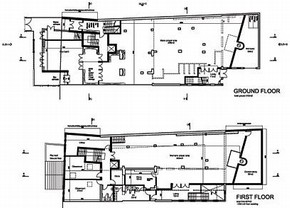 This is a project for a new build mosque on an awkward site tucked in beside a railway line and a school. The configuration of the site helped inform the formal layout of the building, where the architects' aim was to create a sweeping form rising from the street entrance to the top of the minaret.

Again, recognisable Islamic elements have been re-interpreted with a contemporary aesthetic sense to create dynamic and new forms. The usual dome has been replaced with a triangular raised and glazed form, and the minaret is formed through the pulling up of one corner of a cube shaped block. The building is clad in timber to further reinforce the organic and sustainable sensibility.

The mosque in Hackney is on a site slotted in between two buildings on a side street. The new building is presented to the street as an elevation, so it was treated it as a flat decorated plane.  As a starting point, Makespacearchitects took a Moorish tiling pattern from the Alhambra palace in Granada, and enlarged and abstracted it to form the façade of the building. Through this abstraction process they were able to create a design which is part structural, part enclosure, part Islamic pattern, and part abstract shape. The rest of the façade is covered with horizontal metal louvers in front of glazing which fully covers the 3 storey mosque.

In this design the architects have tried to maintain a connection with an Islamic architectural history, without reverting to the formal elements of minaret and dome. 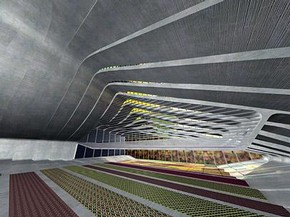 Religious and secular: The elevated mosque

The project has separated the secular and religious functions of the building. The main secular spaces are at the entry level, including the entry hall, auditorium, dining areas and exhibition spaces. The mosque and courtyard are lifted above the ground removing it from its urban context and enabling it to form a floating sacred space above the city.

The courtyard is a private internal space reached from the lower secular parts of the building below and used almost exclusively as the entry to the mosque. As such, the central courtyard is seen as a contemplative space and an area of transition between the outside world and the inner space of the mosque. The courtyard is a sheltered space formed by the walls of the auditorium, the library and the kindergarten. Whilst this spatial composition has its origins in the historical four walled mosques it also provides additional outdoor space for prayer when the mosque is full on Eid (end of Ramadan, the month of fasting) or Jumma (Friday prayer.) 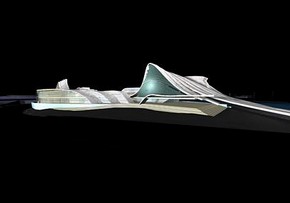 Emphasis has been put in the treatment of the overall design to ensure the reflective quality of enclosure, which the cultural and spiritual nature of this brief and project demands. The distinct seclusion of the main prayer halls - the focus of the project, creates a distinguished space removed from the clamour of public interaction. The use of the courtyard space articulates the visual separation enhancing the privacy between the men and the woman’s prayer spaces while providing for additional prayer space if required.

The metaphor of Islamic calligraphy is apparent in the flowing lines of the structure and the sections of the building. Calligraphy (and Qur’anic verses) as a layer appears as a part of the internal skin of the prayer halls in particular. 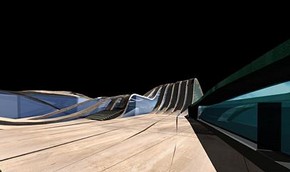 The ascent: A narrative of light and sound

The journey or ascent to the mosque is organised by the narrative of light and sound. The base of the building slopes down to meet the river and the ground level entry area. Slits on the floor of the raised mosque enable light and sound to fill the area below – dematerialising the volume above.

The form of the mosque itself is derived from sound patterns, reverberations and the play of daylight. The Quibla (direction of the Kaaba in Mecca) wall is accented to provide a sound envelope inside the mosque. The wall is illuminated by light reaching it through slots between the main structural arches.

The idea of Islamic geometry was taken to generate a fractal space. The fractal promotes the reinforced concrete arches as primary structure. This in turn supports a secondary layer of interspersed concrete panelling, glass and ceramics. The effect is to generate a mosaic or fragmented skin, which provides an unexpected composition of light and sound. The coloration of the building is achieved by black and white pigmented concrete, hints of turquoise ceramics and translucent glazing elements.