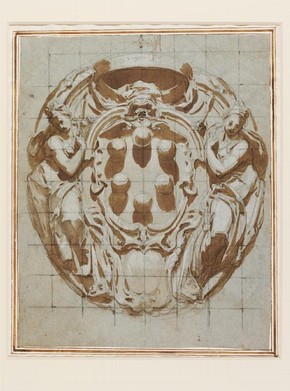 This drawing in pen and ink and wash with charcoal on blue paper is by Bernardo Barbatelli, called 'Il Poccetti' (1548-1612). It dates from the first decade of the 17th century, towards the end of the artist's career, and is a design for a cartouche showing the arms of the Medici family. During the 16th century the Medici family rose to power in Florence, their sphere of influence extending to Tuscany in 1569 when they conquered Siena, thereby creating the Grand Duchy of Tuscany. The Medici were consequently given the title of 'Dukes of Tuscany ' that year by Pope Pius V (1504-1572).

Poccetti trained in the Florentine workshop of Michele Tosini (1503-1577), a pupil of Ridolfo Ghirlandaio (1483-1561). His work includes frescoes for chapels and the facades of buildings - surviving examples including that of the Palazzo di Bianca Capello, Florence, as well as altarpieces and designs for decorative schemes within palaces. Poccetti's patrons included the Carthusian monks of Florence and Siena as well as the Strozzi and Medici families.

This large and powerful composition is expressive of the emergence of the early Baroque. The design incorporates the allegorical figures of Justice (with a sword) and Prudence (with a mirror) flanking the Medici arms, surmounted by the grand ducal crown, above a blank cartouche. The drawing has been squared off in charcoal, suggesting that the design was transferred for use in another medium. The composition exploits the contrast between fluid chiaroscuro and bright highlights on the mid-tone of the coloured paper to emphasise plasticity of form. Its purpose has not yet been established - it may have been made for an architectural stemma on a façade, or more probably for a trompe l'oeil heraldic tapestry. The latter were produced in considerable quantity by the Medici tapestry workshop in the early 17th century. There are tapestries of a similar design to this one still displayed in the Sala di Bona in the Palazzo Pitti, Florence, which was decorated by Poccetti.

The first known owner of this drawing, the Comte d' Oultremont of Flanders, acquired several albums of drawings in Tuscany in the 18th century including many works by Poccetti. The drawings from these albums, mostly Tuscan, date from the 16th and 18th centuries and are all mounted on thin paper with brown in parallel lines, which can be seen on this drawing. The V&A began to acquire major Italian design drawings at the Woodburn Sale in 1860. There were previously no works by Poccetti in the V&A collections.