Design for a Constructivist stage setting by Alexandra Exter 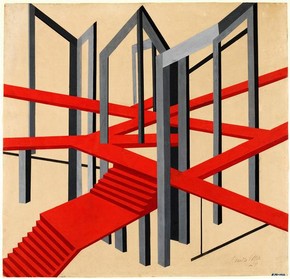 Alexandra Exter was one of the most prominent Russian avant-garde artists particularly recognised for her original contribution in the sphere of theatre design. Her collaboration with Alexander Tairov, director of the Kamerny (Chamber) Theatre in Moscow, between 1916 and 1921 provided Exter with a chance to create stage settings based on the new principles that rejected painted decorations and backdrop curtain. Instead, the artist focused on the construction of volumetrical theatrical space distinguished by dynamism and economical form.

This particular design for a Constructivist stage setting was created by Exter in 1924. There were several copies or versions of the same design and this one was created for 'Scene 8'. It has been associated with one of Alexander Tairov's productions in Moscow but could have possibly been destined for the décor of 'Aelita', a film based on Aleksey Tolstoy's novel, for which Exter created costumes and other décor designs. In the film, the space-travellers from Earth inspire a socialist revolution on Mars after finding the planet and its inhabitants close to annihilation. It is possible that the rigid and austere quality relates to the interpretation of the futuristic plot of the story. However, it simultaneously successfully highlights Exter's core ideas regarding the creation of theatrical spaces.

The artist's appreciation and knowledge of the changing approach to modern set design introduced by Adolph Appia and Gordon Craig, which called for simplified structures that would correspond to actor's movement and improve the interaction between the actors and the audience. In this design these ideas directly resonate with Constructivist focus on bare natural textures of surfaces and architectural logic of structures. Exter's combination of steel-like geometric constructions, a combination of interlinked red stairs and elevated walkways seeks to resolve the problem of movement and facilitate improvisation. In Exter's view, this architectonic type of set with various levels was more likely to relate to the dramatic movement and internal rhythm of the play. Each walkway can potentially serve as a setting for a particular scene or all of them can be used simultaneously to represent a more complex interplay. The Constructivist stage setting reflects Exter's belief that the role of a theatre designer was to provide the actor with unobstructed space which would improve and not distract a performance.

Exter immigrated to France and permanently settled in Paris in 1924 where she continued her work as a theatre designer. Although her later style adopts some decorative features, these are still used economically and serve a suggestive rather than ornamental purpose. Exter's signature Constructivist style and focus on structure and volume in theatre décor related more to her Russian avant-garde contemporaries such as Lyubov Popova and Alexander Rodchenko rather than the overwhelming decorations of Leon Bakst produced for the Ballet Russe.

The design can be seen on request in the V&A prints and drawings study room.