Design for a State Bed by John Linnell, 1765 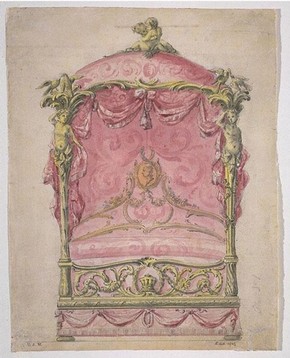 John Linnell began his career designing rococo-style furniture. However as neoclassicism swept across Europe in the late 18th century, Linnell embraced the fashionable and hugely popular neoclassical style. This design for a state bed from around 1765 is one of his earlier explorations of the idiom and includes features such as the cartouche with the Roman-style figure, festoons, swags and laurel wreaths which are characteristic of neoclassicism.

Love is a key theme in the decoration of the bed. Kissing figures on top of the tester and kissing birds above the bedposts both emphasise the amorous role of the bed.

This design is particularly elaborate and fanciful. The bed was never made, which could be a result of impractical elements within its design. There is no proper head board; just carving placed on top of fabric, lessening the physical comfort afforded by the bed. Additionally, it would have been impossible to weave damask to the dimensions in the design, because contemporary looms were too small.

On close inspection it is apparent that this design is not symmetrical. The bedposts feature different carving and motifs as does the valance. Variety within the design suggests that Linnell was providing different options to the client, or that this design was a study in the use of neoclassical motif.

We do not know who commissioned this design. State beds were showy and often fabulously expensive items of furniture which were made for aristocratic clients to display their wealth, and to entertain royal guests. The earl's coronet at the foot of the bed suggests that this design may have been made for an earl. It was one of Linnell's most ornate designs for a bed, and the opulent fabric and elaborate carving and gilding confirm the status and wealth of the intended client.

John Linnell (1729-1796) was the son of the furniture maker William Linnell (about 1703-1763). He was one of the first English furniture makers to be educated in design, studying at St. Martin's Lane Academy, founded by William Hogarth in 1735. In 1750 Linnell joined his father's firm to work as a designer. On his father's death in 1763 he took over the family firm. During his lifetime John Linnell produced high quality furniture which rivalled that of other leading furniture makers including Thomas Chippendale, John Cobb and William Ince and John Mayhew.

The design can be seen on request in the V&A prints and drawings study room.