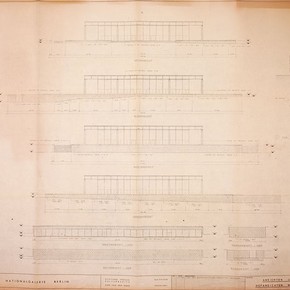 The Neue Nationalgalerie's compositional effect refers to ancient temples, an impression that arises from the way in which Mies's signature 'cruciform' columns are carefully proportioned and spaced to recall classical columns. Mies became deeply preoccupied with the relationship between three aspects of architecture - function, space and structure. The challenge was how to unite these in ways that would express the very essence of the 20th century.

These designs were made by Mies van der Rohe in 1968. They were offered to the V&A as a gift by Roy and Sheila Bright, who in turn had acquired them after a visit to Mies van der Rohe's Chicago office in the 1970s.

The vast overhanging steel roof of the gallery encloses an uninterrupted void within, which when combined with the perimeter curtain glass walling creates a noble statement on architectural transparency, volume and light. Aesthetic principles aside, Mies's design for this glass and steel pavilion had a practical purpose too. Due to the interior space being almost completely unobstructed, it was possible to allow a free arrangement of artworks, display panels, and wall dividers to suit any particular exhibition format. The underlying principle was that buildings in an era of rapid and continual change should not be designed to fit rigidly around any particular set of functions, but instead should be as flexible as possible, with a minimum of fixed elements. From the 1920s onwards, Mies's designs had been dedicated to this quest for a particular kind of space - open and flowing rather than closed and cellular. 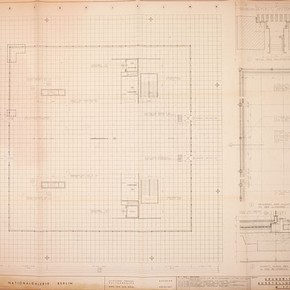 Ludwig Mies van der Rohe, along with Walter Gropius and Le Corbusier, is widely regarded as one of the pioneering masters of modern architecture. His designs, as exemplified in the German Pavilion in Barcelona or the Seagram Building in New York, were stated with the utmost clarity and simplicity.

The New National Gallery of Art in Berlin was Mies van der Rohe's last great building, opening a year before his death.

This drawing can be found in the V&A Prints and Drawings Study Room.

An unexecuted design for the Library and Administration Building, Illinois Institute of Technology, Chicago, Illinois, 1944, can be viewed in the Architecture Gallery, reference PA843/1

For additional objects by by Mies Van der Rohe in the RIBA Drawings Collections search www.ribapix.com or www.architecture.com/LibraryDrawingsAndPhotographs/RIBALibrary/Catalogue.aspx