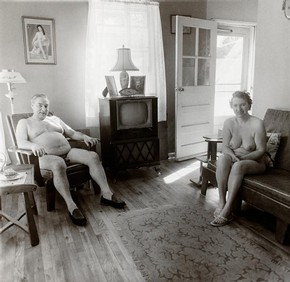 'Nothing is ever the same as they said it was. It's what I've never seen before that I recognize.'
Diane Arbus

Diane Arbus (born Diane Nemerov, 1923–1971) was an American photographer whose work captured 1950s and 1960s America and transformed the art of photography.

Diane Arbus was born in New York City and found most of her subjects there. She was a photographer primarily of people she discovered in the metropolis and its environs. Her 'contemporary anthropology' - portraits of couples, children, carnival performers, nudists, middle-class families, transvestites, people on the street, zealots, eccentrics, and celebrities - stands as an allegory of postwar America and an exploration of the relationship between appearance and identity, illusion and belief, theatre and reality.

For Arbus, photography was a medium that tangled with the facts. Many of her subjects face the camera implicitly aware of their collaboration in the portrait-making process. In her photographs, the self-conscious
encounter between photographer and subject becomes a central drama of the picture.

Diane Arbus first began taking pictures in the early 1940s. While working in partnership with her husband, Allan Arbus, as a stylist collaborating in their fashion photography business, she continued to take pictures on her own. She studied photography with Berenice Abbott in the 1940s and with Alexey Brodovitch in the mid-1950s. It was at Lisette Model's photographic workshop around 1956, however, where Arbus found inspiration and began seriously pursuing the work for which she has come to be known.

Her first published photographs appeared in Esquire in 1960. During the next decade, she worked for Esquire, Harper's Bazaar, The Sunday Times Magazine and other magazines. 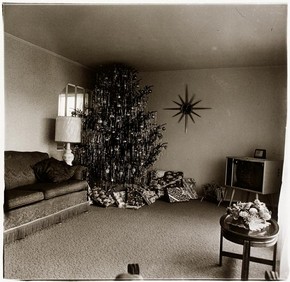 In 1962 - while searching for greater clarity in her images and for a more direct relationship with the people she was photographing - Arbus began to turn away from the 35mm camera and started working with a square format (2 1/4-inch twin-lens reflex) camera. She began making portraits marked by a formal classical style that has since been recognised as a distinctive feature of her work.

She was awarded Guggenheim Fellowships in 1963 and 1966 for her project on ‘American Rites, Manners, and Customs.’ She augmented her images of New York and New Jersey with visits to Pennsylvania, Florida, and California, photographing contests and festivals, public and private rituals.

Notable among her late works are the images from her Untitled series, made at residences for people with mental disabilities between 1969 and 1971. In 1970, Arbus made a portfolio of original prints entitled ‘A box of ten photographs’, which was meant to be the first in a series of limited editions of her work.

Arbus committed suicide in 1971. At the time of her death she was already a significant influence - and something of a legend - among serious photographers, although only a relatively small number of her most important pictures were widely known.

Diane Arbus had a remarkably original and consistent vision and her pictures remain as powerful and controversial today as when they were first seen.

Arbus's gift for rendering strange those things we consider most familiar continues to challenge our assumptions about the nature of everyday life and compels us to look at the world in a new way. By the same token, her ability to uncover the familiar within the exotic enlarges our understanding of ourselves. Her devotion to the principles of the art she practiced without deference to any extraneous social, political, or even personal agenda has produced a body of work that is often shocking in its purity, in its bold commitment to the celebration of things as they are.


This content was originally written in association with the exhibition 'Diane Arbus, Revelations', on display at the V&A South Kensington from 13 October 2005 – 15 January 2006.