Drawings for the sculpture of 'America' 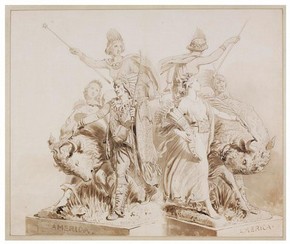 These three drawings by John Bell (1812-1895) are designs for a sculpture representing America, made for one corner of the base of the Albert Memorial in Hyde Park, London, in 1864. The Memorial itself was designed by the architect Sir George Gilbert Scott (1811–1878) to commemorate Queen Victoria’s Consort, Prince Albert. Four different sculptors were commissioned to decorate the corners of the base of the Memorial with sculptural groups representing the continents of Africa, Asia, America and Europe. Each group was intended to have four figures, illustrating appropriate countries or peoples, arranged around a representative animal on which is seated a fifth figure, female in every case, who was intended to personify the spirit of the continent. Queen Victoria and her committee chose the sculptors. Bell’s fee for designing and making this important work was £5,000. The design process for the sculpture involved trying out ideas by drawing, modelling in clay, and then plaster, before the work was finally carved out of marble. These three drawings are ‘presentation drawings’ made to be shown to a client, rather than rough sketches. 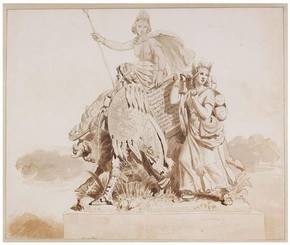 They look finished, but yet they could still serve as working designs, and it is apparent that Bell’s ideas for the figures continued to develop after the completion of these drawings.

One of the drawings shows two views, from different sides, of a woman who personifies the spirit of America, holding aloft a sceptre. It is in fact displaying the sculptural group from two different viewpoints in a single image. The left side of the drawing shows a bison subdued with a knife by a Native American carrying a bow and shield. The figure of ‘America’, wearing a feather headdress, sits on the bison. The head of a female figure personifying Canada, wearing a wreath of pine cones, is visible beyond the bison. The right side of the drawing shows the full view of ‘Canada’, carrying a cornucopia full of corn, with the bison, its rider, and the face of the Native American alongside her. 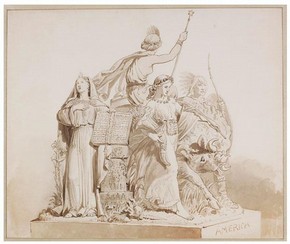 The third drawing shows the same group from the opposite side, and here can be seen on the far left a female figure personifying Christianity. She is holding up a bible open at Isaiah,

Chapter 44, verses 18-22, which in its original historical context may have alluded to the spreading of Christianity amongst those of other beliefs. She leans on a plinth inscribed with hieroglyphs representing Native American writing, at the base of which are fallen trophies of skulls attached to a spear.

In all the drawings the sculptural group is set against the impression of a landscape with trees, as befits designs for a sculpture intended to be set in a park. The sculpture itself, also illustrated here, differs considerably from the designs. All the figures, apart from ‘America’ and the bison, have different poses and are treated differently in terms of racial characteristics, dress, and cultural and religious symbolism.

Acquired with the generous assistance of the Royal Commission for the Exhibition of 1851.