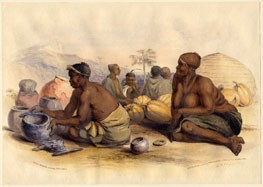 Objects from South Africa form a small part of the Victoria and Albert Museum's collections although ongoing cataloguing work regularly adds new items to this body of material. Four pots from KwaZulu-Natal province, South Africa, were recently identified amongst the Museum's ceramic holdings.

The pots arrived at the V&A in 1901 when they were transferred from the collections of the Museum of Practical Geology at Jermyn Street, London. They had originally been donated by a Major Garden but no records have survived to document who he was, how he acquired the pots or when he gave them to the Museum. It is likely that, given the pots' source is recorded as 'Natal', that Major Garden was an agent of this former British colony which now forms part of the province of KwaZulu-Natal. 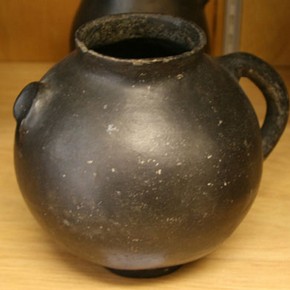 Earthenware pot, unknown, 19th century. Museum no. 4297-1901. This pot was probably used for serving or drinking beer. A thumb-shaped impression on the side of the vessel, opposite its handle, would have made the smooth spherical vessel easier to hold.

That these four fragile ceramic objects survived the journey from Natal to London, a subsequent museum transfer and the passing of a century in between is remarkable. Even in South Africa, handbuilt Zulu pots of this period are rare. Although more research is required to accurately date the pots they would have been created at some point in the 19th century, a period witness to increasing production and use of Zulu pottery as Zulu communities changed from scattered, mostly pastoral clans to being concentrated in large military kraals. Large clay pots were made for the mass storage of food and brewing of beer (utshwala). A variety of smaller pots of different shapes and sizes was created for serving and drinking beer.

Making pottery was a highly-specialised skill, one practised only by Zulu women. Clay was dug near the homestead, dried out and later reconstituted with water when required. Different kinds of clay were used for different sizes of pot, with fine clay being used for smaller, more delicate vessels.

Pots were constructed by adding coils of clay to a base, pinching them together by hand and smoothing them inside and out. Following a preliminary firing, smaller pots were polished with animal fat, soot and a pebble or re-fired in a smoky fire to produce a glossy, dark finish. A highly burnished surface made pots less porous. 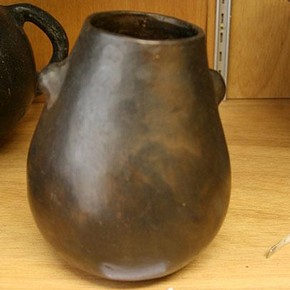 Earthenware pot, unknown, 19th century. Museum no. 4296-1901. This pot was probably used for drinking beer although its unusual shape and nodular handles - useful for holding the pot - reflect the appearance of larger wooden vessels used by Zulu communities for the storage of milk.

The V&A's four pots are of a size that suggests they may have been made for beer drinking. Beer was made from millet, sorghum and maize and, depending on the fermentation processes, could be strongly alcoholic or merely nutritious. Its production was associated with a good harvest - to provide the grain needed - and offering beer was an important part of being a good host. Beer was also associated with the ancestors who shared the dark, cool sacred space at the back of the head of a homestead's house where beer was stored in large round vessels.

Two of the V&A pots reflect the elegant simplicity of form and smooth finish which are characteristic of Zulu beer vessels of the period. However, the other two pots - one of which has had a crudely-made neck added to a smooth spherical base, the other a ridged main body and uneven finish - would have been unlikely to appeal to Zulu users. It is possible, instead, that these pots were intended for European use, perhaps as vases. One possible source for such pots, if this were the case, was the many mission stations established in the area by missionary organisations aiming to 'improve' the spiritual and economic health of the Zulu.

Future research may be able to provide more details about where and why the pots were created and acquired. Until then, they remain as a tangible reminder of the interlinked histories of Britain and South Africa and as a powerful counterpoint to the historic European ceramics which form the majority of the V&A's holdings. In South Africa, beer pots have continued to provide a focus for the work of contemporary ceramicists, most notably the award-winning Zulu potter Nesta Nala and her daughters Jabu, Thembi and Zanele Nala whose work is collected by individuals and institutions around the globe. 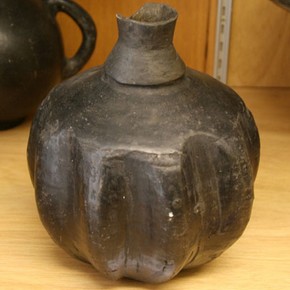 Earthenware pot, unknown, 19th century. Museum no. 4294-1901. While original museum documentation describes this vessel as 'Zulu' its unusual shape and crude finish would not have appealed to Zulu users. It is possible, instead, that the pot was intended for European use, perhaps as a vase. 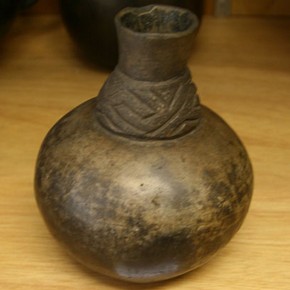 Earthenware pot, unknown, 19th century. Museum no. 4295-1901. The smooth spherical base of this pot was probably made to store beer. While some small storage pots did have a cylindrical neck (to avoid losing any of the contents) the neck of this pot is too crudely made for a Zulu user and it may have been designed for European use, perhaps as a vase.

Jolles, Frank. 'The Origins of Twentieth Century Zulu Beer Vessel Styles.' Southern African Humanities 17 (December 2005): 101-51. [The Museum thanks Frank Jolles for his comments on the Zulu pots in its collection].