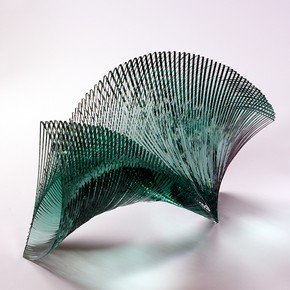 Niyoko Ikuta is a Kyoto-based artist whose work has been much acclaimed ever since she started exhibiting in the early 1980s. Her work has been collected by numerous Japanese museums and is also represented in the USA by institutions such as the Corning Museum of Glass.

In its 1995 exhibition, Japanese Studio Crafts: Tradition and the Avant-Garde , the V&A showed a work by Ikuta from the collection of the National Museum of Modern Art, Tokyo (MOMAT). The V&A's contemporary Japanese glass collection is still relatively modest, consisting of what are nevertheless substantial works by leading figures such as Kyohei Fujita (1921-2004), Denji Takeuchi (b.1934), Naoto Yokoyama (b.1937) and the younger Yoshihiko Takahashi (b.1958).

The inclusion of this spectacular work by the Tokyo-based Yufuku Gallery in COLLECT 2009 provided a fine opportunity for the V&A to acquire a piece of contemporary glass by a highly respected Japanese maker who employs harshness of material and severity of process to achieve a remarkable sense of fluidity and sensuality. The artist has recently written of her work in the following terms:

'I am captivated by the complexity of light as it reflects, refracts, and passes through broken cross sections of plate glass. In 1980 I began making artwork by laminating sheets of glass using adhesive and exposing the cross sections. My motifs are derived from feelings of gentleness and harshness, fear, limitless expansion experienced through contact with nature, images from music, ethnic conflict, the heart affected by joy and anger, and prayer. In creating my pieces it is like imagining an architectural space when viewing blueprints, deciding on an image by reading into the intentions of the architect, or imbuing a space with dynamic energy to bring it to life. I am nervous when placing my finished work of art in a specific space, but I also enjoy it.'

Presented by The Art Fund