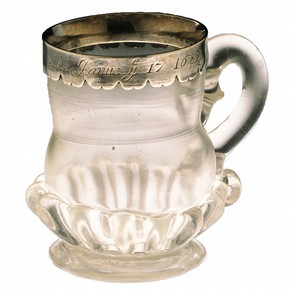 Frost Fair Mug, glass with engraved silver mount, made in London, perhaps Southwark, (museum no. C.156-1997). Purchased with the assistance of the National Art Collections Fund

A miraculous survival, this tiny glass mug is a souvenir of the Frost Fair, bought from a stall erected upon the Thames ice when the river froze during the winter of 1683-4.

When the Thames froze in the winter of 1683, London tradesmen, deprived of their usual living by the severe weather, created a spectacle such as London had never known...

A double row of booths was erected upon the ice, running from Temple Stairs across to the south bank. Temple Street, as it was known, incorporated coffee houses, inns and souvenir shops.

Meanwhile on the surrounding ice a wide variety of entertainment was available, including fox-hunting, bear-baiting, football, and even ox-roasting. With the melting of the ice on 8 February 1684, all vanished beneath the waters.

This glass mug, a rare souvenir of the fair, is inscribed on its metal mount with the words 'Bought on ye Thames ice Janu: ye 17 1683/4'. It may well have been engraved on the spot at one of the toy booths shown on woodcut illustrations of the Fair. Too small for use yet too precious for a child to play with as a toy, this evocative and delightful object has survived against all odds, providing a momento of one of the most famous events of late 17th-century England. 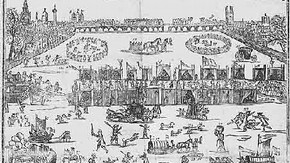 Woodcut showing a view of the Frost Fair on the River Thames, 1683

As well as commemorating the fair, this unique mug also lays claim to being the only accurately dated piece of English glass of the 1680s. Less than 6cm high, the mug is a perfectly reduced version of a contemporary glass ale mug, complete with base ribbing. Its slightly cloudy or 'crizzled' glass suggests that it was not a product of the Savoy glasshouse where George Ravenscroft had, by 1676-7, perfected his lead crystal glass. Instead, it was perhaps made at the nearby Southwark glasshouse where the successful formula had yet to be replicated. 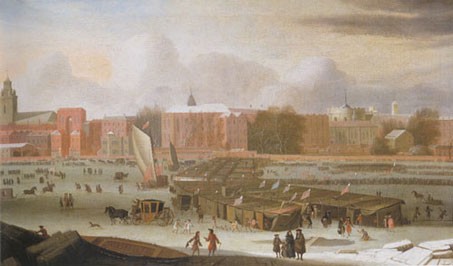