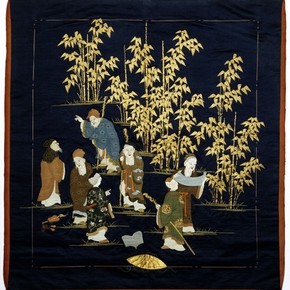 This Japanese gift cover came to Britain as the result of a misunderstanding.

The cover, called a 'fukusa' in Japanese, was made in the second half of the 19th century. Traditionally in Japan, gifts were placed in a box on a tray, over which a beautifully embroidered or decorated fukusa was draped, concealing the gift.  After being suitably admired, the fukusa, along with its box and tray, was returned to the giver and only the presents retained. The choice of a fukusa appropriate to the occasion was an important part of the gift-giving ritual.

The richness of the decoration was an indication of the donor’s wealth and the quality of the design evidence of their taste and sensibility. This satin fukusa is embroidered in the yatsuzuma style, using silk and metallic threads. It depicts the Seven Sages, a group of Chinese Taoist philosophers who gathered in a bamboo grove to talk and drink.

This is one of a group of fukusa acquired by the Victoria and Albert Museum in 1963. They belonged to a Mrs Farmer who, as a three year old, had travelled with her mother to Japan, to visit her tea merchant father. According to papers in the V&A’s archives, the Meiji emperor, having never seen such a young European child, asked for the family to be formally presented at the palace. 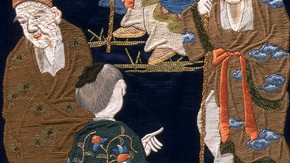 Following the visit a number of gifts, each covered with a fukusa, were sent to the tea merchant’s house. The mother, unaware of the Japanese custom of gift-giving, kept the fukusa instead of returning them.

When the father arrived home he was horrified by this cultural faux pas and, deeply embarrassed, tried to return the fukusa to the Imperial palace. The emperor was obviously not offended, however, for the family were told they could keep them.