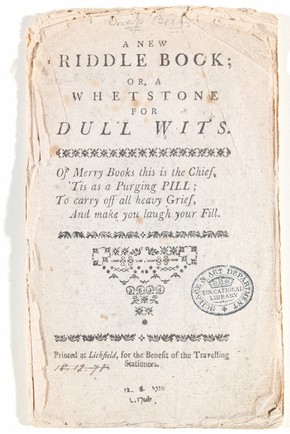 Riddles have no set form.

Characteristics of the riddle

A riddle is, of course, a verbal puzzle: an enigmatic statement, description or question posed by one person to another, or to a group, who have to guess the answer. We use the term loosely for more than one kind of puzzle. However, the riddle proper relies on imagery for its effects; often quite poetic imagery.

Here is a selection of traditional riddles in English. The answers can be found at the bottom of the page:

The last three riddles here all rely on misdirection by means of elaborate metaphors. As you will have noticed, all of these riddles are in verse form.

History of the riddle

5
Often I must war with the waves, fight with the wind –
strive with both at the same time –  when I depart to seek
the earth beneath the waters; to me my home is an alien place.
I am strong in the struggle if I hold still –
if I slip, even slightly, they are stronger than I
and, wrenching me loose, soon force me to flee;
will carry away the thing I must keep safe.
I can avoid this so long as my tail endures,
and the stones against my strength have power
to keep firm. Guess what I'm called.

This translation attempts to give some of the flavour of the elaborate patterns of alliteration found in the original (and in Anglo-Saxon verse in general).

In the 20th century Sylvia Plath wrote some poems with pronounced riddling qualities: see especially 'You're' and 'Metaphors'. Take away the title, and her poem 'Mushrooms' would make an excellent riddle.

Many riddles have the names of objects for their answers. So why not see if a museum object inspires you to write a riddle?

The art of writing riddles is to tease the reader with clues that are both accurate and misleading. Think carefully about the nature of your chosen object. What are its characteristics? What metaphors come to mind when you try to describe these?

Extended metaphors are particularly useful. These are metaphors developed through more than one point of comparison. The last of the four traditional riddles on this page contains a particularly neat example of an extended metaphor: 'And every time the cock do crow, / It lightens, hails and thunders.'

Many riddles incorporate paradoxes (apparent contradictions). The last two lines of the first traditional example are paradoxical: 'I am higher than a house, / and yet am lesser than a mouse.' The fourth line of the Anglo-Saxon riddle is a bit of a paradox too.

A riddle about an object very often describes it as though it were some kind of strange creature, or even a person. Riddles in which the subject is made to address the reader directly are quite common, as you will have noticed from the examples.

Cultivate a riddling habit of mind and the everyday world will be revealed as full of unexpected wonders.

3: Bell in a steeple