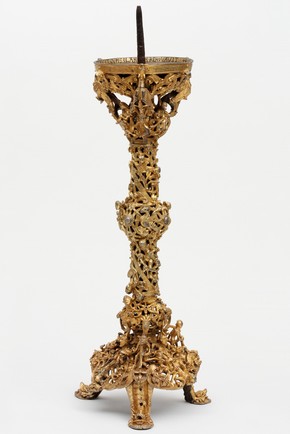 This candlestick, dating from 1104–13, originally belonged to the Church of St Peter in Gloucester (now Gloucester Cathedral) but ended up in the treasury of Le Mans Cathedral. As such metalwork was commonly melted down and reused, its survival is both remarkable and significant, showcasing techniques and craftsmanship in the Romanesque style which might otherwise have been lost. Even more exceptional are the three Latin inscriptions that reveal the candlestick’s history, meaning and provenance.

The inscription around the stem reads 'The devotion of Abbot Peter and his gentle flock gave me to the Church of St Peter of Gloucester'. Peter was abbot of the Benedictine abbey of St Peter in Gloucester between 1104 and 1113, and the candlestick can therefore be dated to this period. Abbot Peter continued the programme of building and expansion begun by Abbot Serlo in about 1072, progressing the building of St Peter’s Church. The donation of a rich gift such as this candlestick marked the wealth and success of the Benedictine community.

The inscription around the outside of the drip pan reads 'Burden of light, work of virtue, brilliantly shining teaching preaches so that Man may not be darkened by sin.' This suggests the candlestick may have symbolised the light which illuminated virtue of Christian teaching and prevented the shadow of sin. In practical terms it may have been used on the altar or to light a shrine.

The Gloucester Candlestick is decorated with a menagerie of real and fantastic creatures. Winged dragons support the drip pan, apes clamber along the stem and hybrid animals bite, grab and pull for position among foliage and flowers along the base. Among the dragons and beasts, the symbols of the four evangelists can be found at the knop (the ornamental swell in the middle of the stem). The candlestick has often been interpreted as the struggle of vice and virtue, as the creatures strive to reach the light or sink into the darkness below.

The decoration is closely related to manuscript illumination, which commonly depicted real and mythological beasts of vibrant colours hidden among, struggling against, or growing as part of, the wild undergrowth. On the Gloucester Candlestick, as in many contemporary illuminations, each creature and foliate spray is connected, creating a sense of ordered chaos.

Both speech and silence appear as themes within the decoration. Apes and hybrid creatures are silenced by their neighbours, or are caught whispering to one another. Figures such as apes were associated with sin and the devil in medieval bestiaries, while hybrid creatures such as centaurs were sometimes considered to have no soul. Perhaps the silencing of secretive chatter of these bestial creatures visually expresses the need to listen to the teaching of God. This reinforces the message of the inscription of the drip pan, which says that 'shining doctrine teaches so that man be not shadowed by vice'.

The inscription around the inside of the drip pan reads 'Thomas Pociencis gave this to the Church of Le Mans when the sun renewed the year'. Little is known about Thomas of Poché (a parish in the Diocese of Le Mans), but we do know that the candlestick was in the treasury of Le Mans Cathedral until the 19th century. No historical documentation has been found as to how Thomas acquired it and when he presented it to the church, though certain historical events offer some suggestions.

On 8 March 1122 St Peter's Abbey was destroyed by fire. The Anglo-Saxon Chronicle states that only a few books and three vestments survived intact. Was the candlestick looted during this fire? Or perhaps it was not counted among the surviving objects because it had already left the Church of St Peter? The Romanesque Church of Le Mans had been dedicated only two years earlier and the candlestick, a high quality example of Romanesque art, would have been a rich and fitting gift for the new church.

During the reign of Abbot Foliot (1139–48) a Welsh raid looted over 300 marks' worth of goods from the Abbey. Foliot's letters demonstrate that he intended to supplicate the Welsh princes in the hope of securing the return of some of these possessions. Was the Gloucester Candlestick one of the stolen items?

In 1194 and 1210 St Peter's Abbey was forced to sell plate, silver chalices and even horses to raise money for taxes. Was the candlestick amongst them? By the late 12th century this Romanesque object would have been out of style with the Gothic fashions of the day and might have been considered suitable for sale. The candlestick's symbolism, with its references to light and the virtue of holy doctrine, may explain why someone would want to buy it. A Gothic extension to the Church of Le Mans was finished in 1254, and the relics of St Julien brought there. The community processed through the building carrying torches and candles signifying the light of faith within their hearts. The donation of the candlestick to Le Mans at this time could have symbolised Thomas of Poché's part in the congregation and the celebration of light. 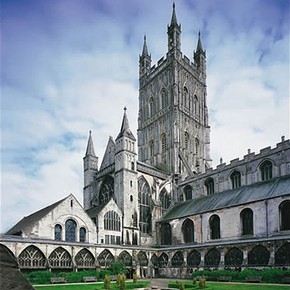 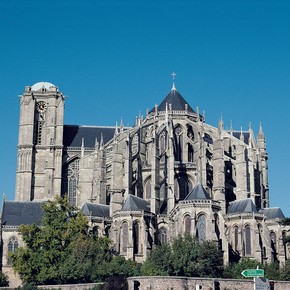 The candlestick was cast in three parts, using the lost wax method. A recent sample casting shows how this may have been done. The base, stem and drip pan were modelled separately in wax. Much of the detailing of the figures would have been formed in the wax, to be finished once the casting was complete. Wax sprues, known as runners and risers, were attached to the models in strategic places. These created channels to enable the flow of the metal to the mould and the escape of gases during casting.

On its arrival at the V&A in 1861, the candlestick was held together by two pieces of gilded copper tubing slotted inside it. Study of the candlestick’s interior revealed that its sections were originally joined in a different way: prongs on the base slotted into recesses in the stem, locking the sections together. Discreet marks aided the assembly of the object. The top of the stem has similar recesses, though the drip pan shows no evidence of prongs and has no assembly marks.

The original fixings allowed light to pass through the entire candlestick, emphasising its openwork decoration. They may have failed under the pressure of frequent movement or disassembly, and the copper tubing inserted, effectively ‘removing’ the openwork and creating instead a raised relief. Analysis was carried out to measure the chemical composition of the copper tubing to try and discover how and when the candlestick might have been repaired. Energy Dispersive X-ray fluorescence spectroscopy (XRF) was used, which does not damage the object’s surface. The elements found in the metal are comparable to those in other medieval examples, suggesting that the tubing might be an early repair. These elements and impurities are, however, also found in later objects. Curators decided to display the object in the Medieval & Renaissance Galleries as it was originally intended to be seen (minus the copper tubing), showcasing the complex openwork form of the candlestick for the first time in over a hundred years.

Brownsword, R, Pitt, EEH, and Wilkin, J, A Technical Note on the Gloucester Candlestick, Medieval Art and Architecture at Gloucester and Tewksbury, Journal of the British Archaeological Association, 7, (1985), 168-170

Harris, A, A Romanesque Candlestick in London, Journal of the British Archaeological Association, 27 (1964), 32-62