These outstanding examples of modern Thai goldwork were created by two senior master craftsmen and tutors at the Royal College of Goldsmiths in Bangkok. 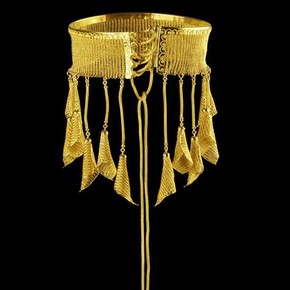 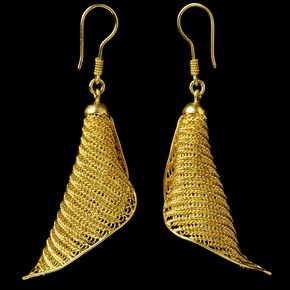 The half open trumpets of a local flower, 'Dok Peep', hang from the collar at the end of twisted gold wires and are found again as the two earrings. The use of this flower gives the pieces a distinctly Thai feel.

Most remarkably, although these are contemporary objects, they were made using medieval Thai goldworking techniques. The most important of these, and the one most in evidence here, is that of the linked-wire goldwork, or woven-gold, used to create the meshed collar of the choker and the hanging flower earrings. This, and other lost techniques once practised at Ayatthaya, a former capital of Thailand, from the mid 14th century to the late 18th century, were consciously revived by a group of goldsmiths at Sukhothai during the mid 1970s.

The craftsmen responsible for these pieces of jewellery were inspired by the find of sumptuous royal regalia dating to the early 15th century which were recovered in 1957 from beneath Wat Rachaburana, a temple within the ruined city of Ayuttaya.