History of the Paintings Collection 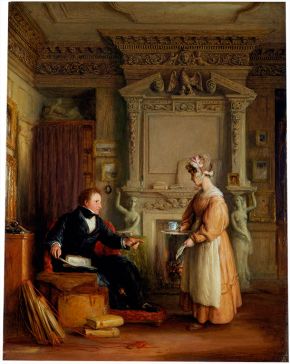 The paintings collection was an original part of the Museum of Ornamental Art, later re-named the Victoria and Albert Museum, which opened at South Kensington in June 1857. From the outset, the link between the fine and applied arts was essential to the V&A’s mission.

In that year John Sheepshanks offered the Museum his collection of around 500 modern British oil paintings, watercolours and drawings to found a 'National Gallery of British Art' .

His gift included major works by Turner and Constable, and substantial groups of pictures by a number of important Victorian artists. He preferred the 'open and airy situation' of South Kensington to the polluted atmosphere of central London, and believed in the importance of making art accessible to the public. The first of his galleries opened in 1857 and is the earliest surviving part of the V&A. The building was extended with further top-lit galleries in 1858-65.

Sheepshanks made his gift ‘in the hope that other proprietors of pictures and other works of art may be induced to further the same objects’. The new museum received the seal of royal approval in 1865 when Queen Victoria agreed to lend the Raphael cartoons, the greatest cycle of Italian Renaissance pictures in England. These public-spirited gestures encouraged a series of bequests and gifts, which form the core of the Museum’s collection of pictures.

Each of the core gifts and bequests is a distinct and recognisable collection. As a group they clearly reveal the enthusiasms of the urban middle classes who had an interest in the arts and a concern to contribute to the public good.

Further collecting by the V&A

Since 1857 the V&A has purchased a wide variety of painted objects including:

The collection aims to show the full range of painting and its applications in particular. The V&A has always held watercolours to be of equal status with oil paintings, and prized portrait miniatures as an integral part of the tradition of watercolour painting.

The V&A never sought to compete with the National Gallery as a collector of old master paintings and gradually ceased to acquire British oil paintings following the foundation of the Tate Gallery in 1897. It retains the national collection.

Explore paintings in Search the Collections