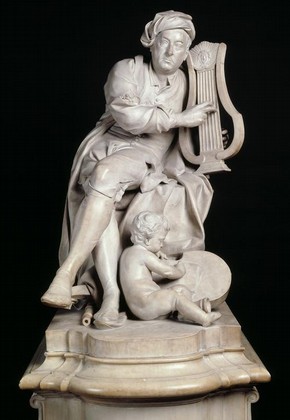 This full-length marble statue of the composer George Frideric Handel (1685–1759) was commissioned by the entrepreneur and collector Jonathan Tyers, who ran Spring Gardens at Vauxhall in London in the mid-18th century. Handel was then a leading figure in the capital's musical life. Since public life-size marble statues of living subjects were until this date undertaken only for monarchs, noblemen or military leaders, this figure made a considerable impact at the time. It is the earliest-known independent work by Roubiliac, and established his reputation as a sculptor.

Louis François Roubiliac (1702–62) was trained in Lyon, later working in Dresden and studying in Paris before moving to London in about 1730. All his known surviving works were executed in Britain. He specialised in portrait busts and funerary monuments, and was renowned for his handling of marble, particularly his creation of subtle surface textures.

Handel has not dressed up to have his portrait taken. He sits comfortably in his indoor clothes, his shirt partially unbuttoned, his slippers off and dangling, and his soft cap pulled over his cropped hair. He is totally at ease with the little naked boy who writes down the music which the composer is striking on a rather fanciful lyre.

The boy has propped his paper against a viol, and an oboe and flute lie discarded beside him. Handel has crossed his legs and listens attentively to his own music, while his left elbow rests on leather-bound scores of his operas and oratorios, including 'Alexander's Feast', finished in 1737, just a year before Roubiliac signed his name on the plinth of this marble statue.

The sculptor has captured the lively, informal and friendly atmosphere of many 18th century novels and plays. He has achieved this not only through the pleasant attitude in which he has portrayed Handel, but also through the relaxed rhythm of the body, the soft curves of the clothes, and the rich textures wherever the light ripples over the crumpled surfaces. Yet the statue is carefully composed: the S curve of the body is framed on the left by the undulating line of the gown, and on the right the lyre and viol pick up the curves of the boy's body and the composer's arm and face.

Forms and spaces intermingle, lights and shadows chase each other, and the edges of the garments trace a playful linear pattern on the polished marble surface. The classical ideal of beauty has not been allowed to transform Handel's relaxed and natural features, and informality is stressed by the absence of the wig which was generally worn in public.

Roubiliac probably knew Handel. They might have met at Slaughter's Coffee House in St Martin's Lane to exchange gossip and discuss Handel's scores, which had been published with engraved illustrations by Gravelot, a French artist who was also a friend of the most famous frequenter of Slaughter's, William Hogarth. They may all have discussed Hogarth's engravings of 'The Rake's Progress' and 'Handel's Oratorios' before setting off up the river to the pleasure gardens at Vauxhall owned by yet another friend of Hogarth, the businessman Jonathan Tyers. 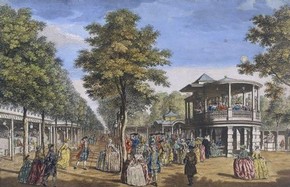 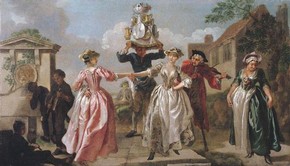 Tyers had opened the Vauxhall Gardens to the public in 1723, about ten years before he commissioned Roubiliac to make the statue. Well-to-do middle-class Londoners brought their friends to Vauxhall for a meal in one of the supper-boxes, which lined both the grove surrounding the bandstand and the two major walks, where on the south side stood our statue of Handel. The lighthearted qualities of the 18th century found expression in the music, the manners of the visitors, and the decorations of the supper-boxes.

Paintings by Hogarth and Hayman of genre subjects like 'The Milkmaid's Garland' and 'Skating on the Ice', painted in a light and gay manner, formed the background to conversations at supper. Originally the statue stood against a background of natural greenery, under a grand arch, on which a female figure symbolising Harmony was perched, supported by putti. The outdoor light played over the marble surfaces, making the statue more lively than it appears now in its indoor setting.

The restful but transitory attitude of the figure must have given the strollers in the Gardens the feeling that the music they were hearing from the Rotunda, together with this statue of the musician, was filling the air with 'his Harmony (which) has so often charmed even the greatest Crouds into the profoundest Calm and most decent Behaviour' (Daily Post, 18 April 1738).

The French engraver Hubert Gravelot had settled in London in the early 1730s, and his engravings helped to introduce to England the delicate, elegant style of the painter Watteau. The charm of lightfooted figures in shimmering satin dresses, the fantasy of tendrils, shells and curves in combinations of the shapes of the letters S and C, found their way into the work of the illustrators, silversmiths, mountmakers and, eventually, the furniture designers.

The French taste invaded English fashions in dress, interiors, and general style of living, although the English admiration for classical restraint and ideals was never extinguished. However much the patriotic Hogarth disliked France, in his work he rejected the official Grand Style which was associated with the leading English patron of the arts, Lord Burlington, and adopted instead the light flowing line in his figures, the flickering surfaces of quickly moving satins, and the lively assymetrical composition of the French Rococo style. The same characteristics can be found in Roubiliac's statue. 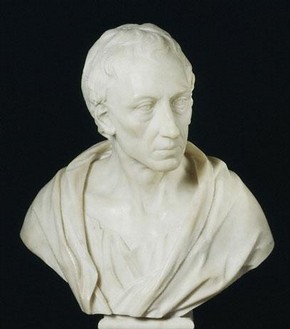 Like Gravelot, Roubiliac was French. He had worked in Paris with a sculptor who also came from Lyons, Nicolas Coustou. In painting the informal style of portraiture was accepted during the first decades of the 18th century and the négligé was clearly acceptable for a portrait bust, even in England, but such informality in a full-length statue was achieved for the first time by Roubiliac in our statue of Handel.

Other portraits in the same style also superb examples of Roubiliac's skill include his terracotta bust of 'Jonathan Tyers' and his marble bust of the poet 'Alexander Pope', which is natural and relaxed as well as dignified. A very fine portrait bust of Hogarth can be seen in the National Portrait Gallery, and also the sculptor's own self-portrait.

Both display that delightful quickness of movement in the facial features, and the light fragmenting over the disarrayed shirt, cloak and cap. Roubiliac even preserves this momentary quality in his final tribute to Handel, the noble monument in Westminster Abbey made about 1761, where Handel stands full-length in contemporary grand costume holding his own music.

Written by Madeleine Mainstone, 1976, and published in the V&A Masterpieces series.
Revised 2006.