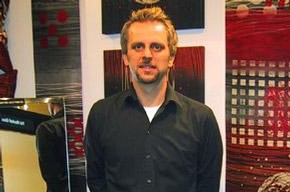 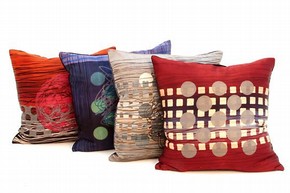 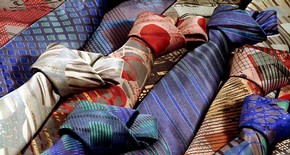 After graduating from Middlesex University in 1989, Neil won the Painters Stainers award for printed textiles at The New Designers Exhibition and was awarded a Crafts Council setting up grant.

Neil produces hand-printed, painted and stenciled one-off and limited edition textiles including fashion accessories and interior items such as cushions and wall hangings.

Did you undertake formal training in college or within the Industry, or did you find your way into crafts via a different route?

After graduating from Middlesex University in 1989, I won the Painters Stainers award for printed textiles at the New Designers Exhibition and was awarded a Crafts Council setting up grant. Within a year I had set up the design studio on the Kent coast.

I exhibited work at the Chelsea Crafts Fair, organised by the Crafts Council, for the first time in 1990. Since then I have exhibited at the fair over 10 times along with many other exhibitions and gallery shows. The exposure to the crafts-hungry market at the early stages of the business led to many commissions and orders. Without having time to plan an alternative career route I became established within the craft world.

How would you describe your work and your position within the Crafts world?

I make silks for interiors and fashion accessories. The range includes scarves, long stoles, satin wraps backed with velvet, velvet scarves, ties and bow ties, cushions and wall-hangings. All my work consists of hand-painted and printed one-off and limited edition designs on silk or velvet.

Wall-hangings can be made to a wide variety of sizes, ranging from full-length drops to narrow panels or smaller pieces for framing. The fashion accessories are hand-painted, printed and stencilled silks produced on a limited edition basis. The range is produced on various weights of silk and velvet. Examples can be seen at various galleries, museums and outlets.

My work is primarily concerned with decorating the flat surface of fabric using paint and print techniques. I aim to create the illusion of depth and richness both in terms of the decorative use of pattern, texture and colour.

Over the last 15 years my work has developed from botanical and architectural influences to my most recent collection, which is totally abstract. This latest work uses a mixture of abstract marks to create decorative images, building layer upon layer a network of pattern which gives an urban feel and conveys a three dimensional quality in its juxtaposition of shapes, textures and colour.

l produce all my own work in my studio. The silks and velvets are individually dyed, stencilled and hand-painted. A library of designs is printed using hand-held screens. The images are overlaid on one another creating the illusion of depth and three-dimensional space.

Over 15 years of experimentation and dye chemistry has resulted in a huge variety of colour options and techniques, many of which are not viable in the commercial print industry. Many items are designed directly on to the cloth, placing printed images over painted washes. The work is also hand-finished to a high standard resulting in a unique item.

My work has been purchased for major collections around the world including the Victoria and Albert Museum in London, the Cooper Hewitt Museum in New York and the Crafts Council collection in London. Work has been commissioned for one off installation pieces for public buildings such as the Smith and Nephew building and the Langham Hilton Hotel. Consultancy projects include the British Museum London, the Shakespeare's Globe Theatre in London, the Royal Academy of Art in London and the Guggenheim Museum in New York, designing exclusive ranges for a capsule market and liasing with buyers and site architects. Work is also exhibited internationally in galleries and ranges have been designed for stores such as Liberty, Harrods, John Lewis, Neiman Marcus and Bergdorf Goodman. The company has created an international label which is both recognisable and collectable to a niche market.

What type of material do you prefer to use?

I use silk and velvet due to the handle of this type of fabric and the fabulous colours that can be achieved.

What would you most like to make that you haven't so far?

In 2005 I received my first commission from the British Museum for designs developed on computer. The work is now on sale at the Museum. I am currently working on a commission for the Shakespeare's Globe Theatre. I am working on computer to produce these designs, which is something that I am very excited about at the moment.

I am part of a generation of people who have had to make a proactive decision not to be left behind by a new generation of graduate designers who work on computer. The experience of the hand-produced ideas generation that I bring to the computer seem to offer a whole new range of possibilities. I am keen to see this project come to fruition. In 1999 while exhibiting in Los Angeles I was told 'you must work on computer it would suit your work, you have to learn this!'. With all the pressures of running a business it has taken a while to be able to practically realise this and to learn the relevant computer programmes.

What would you describe as the most significant development in contemporary textiles within the last 5-10 years?

Without doubt this has to be new computer design software and print technologies. 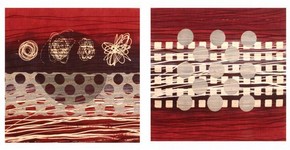