Lacquer panel, Japan, about 1640. Wood, covered in black lacquer with gold and silver relief lacquer, inlaid with silver, shibuichi metal and mother-of-pearl. Museum no. FE.65-2009. Purchased with the support of the Friends of the V&A

This Japanese lacquer panel was almost certainly the top of a chest made around 1640 for the European market.

It bears many striking similarities in subject, style and techniques to the Mazarin Chest, probably the single most important Japanese item in the collection of the V&A. The chest belongs to a small group of extremely high quality lacquer made in Japan for export between the early 1630s and 1640.

Recent art historical research on the Mazarin Chest has revealed that a number of similar chests were made in the same workshop at the same time, though some of slightly lesser quality. These survive either as whole chests or in panels of different size and quality. It has long been known that the Mazarin Chest has a larger and closely related companion, known as the Lawrence Chest, the current whereabouts of which is unknown. Another closely related, though less impressive work, is a cabinet from the Charlottenburg Palace, Berlin.

Other related works survive as lacquer panels that were cut away from their original setting and incorporated into western-style cabinets. Panels from another, a fourth 'Mazarin Chest', appear to have been incorporated into two nineteenth century boulle-work cabinets. One of these (Museum no.1084-1882) is in the collection of the V&A, while the other was offered for auction at Sotheby's, Paris. When pieced together, the two larger and four smaller lacquer panels of these two cabinets appear to make up the front and sides of a fourth chest. 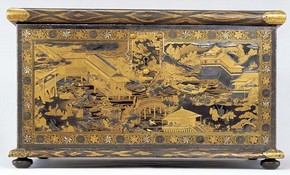 Although the border was removed, this newly-acquired panel bears unmistakable similarities to the top of the lids of the Mazarin and Lawrence Chests, as well as the Charlottenburg Cabinet. These are decorated with a landscape, palace and galleries by a lake, alluding to the Eight Views of Omi (Omi hakkei). This was a Japanese version of a theme from Chinese poetry and painting, the Eight Views of the Xiaoxiang (Xiaoxiang ba jing) These scenes are surrounded by a distinctive cartouche formed by pairs of confronting phoenixes. This is unique to the Mazarin Chest and the other three closely related chests or cabinet. It is very likely that this newly-acquired panel was the lid of this other, fourth 'Mazarin Chest.'

Japanese export lacquer of the seventeenth century was not traditionally signed with the artist's name. However the extremely high quality of the Mazarin and Lawrence Chests and their close similarity to some of the best items of contemporary lacquer for domestic consumption, would suggest a close connection with the two leading workshops in Kyoto, that of the Koami and Igarashi families. Even though the quality of this panel is not as high as that of the Mazarin and Lawrence Chests, it was undoubtedly made in the same workshop.