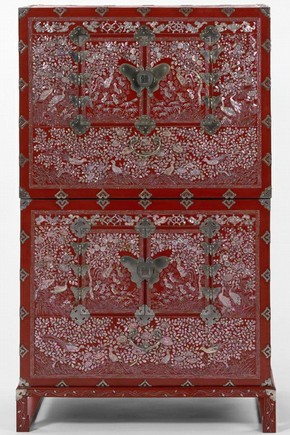 This Korean red lacquer chest inlaid with mother-of-pearl decoration was purchased by a curator from the Ceramics department who was sent to China and Korea to buy acquisitions for the Victoria and Albert Museum. Such long distance travel on behalf of the Museum was very unusual during this period.

The growing interest in Korean art in the early years of the 20th century led a V&A ceramics curator, C. H. Wylde, to visit Korea in 1912 as part of larger trip to East Asia. An enterprising curator, Wylde purchased a range of Korean artefacts, as well as ceramics, while he was there from an establishment in Seoul called Kavanaugh & Co. He bought metalwork, textiles and the one piece of red lacquer furniture. A catalogue produced by Kavanaugh around 1910 illustrates a similar piece of lacquer furniture which they were selling for 150 Japanese yen.

Kavanaugh & Co described themselves as ‘General Commission Agents: Curio Dealers, real Estate and Mine-Brokers - goods packed and forwarded to all parts of the world’. The V&A purchases were shipped and transported to London on board the SS Arcadia, a ship which departed from the port of Chemulpo (present day Inchon) in April 1912. It took almost three months to make the long journey back to Britain.

The red lacquer chest is comprised of two boxes which stack one on top of the other and a separate stand. The stand protected the base of the lower chest from heat radiating from the traditional underfloor heating system, known as 'ondol', found in a Korean house. The red lacquer is lavishly covered with inlaid mother-of-pearl decoration. Phoenixes, cranes, peach trees and fish are depicted as well as stylised butterfly-shaped decorative metal fittings. Such a brightly coloured chest decorated with auspicious motifs would typically have been found in the female quarters of a wealthy Korean home. The chest was used for the storage of clothes and bedding. Until the last decades of the 19th century, red lacquer furniture was strictly confined to royal usage but as restrictions on sumptuary laws loosened, red lacquer items became more widely available. 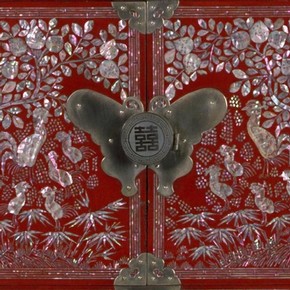 In the V&A archives, Wylde described his purchase for the Museum:

'I bought and paid for this cabinet at Seoul in Corea… The whole style of the ornament is characteristically Corean, the butterfly-shape of the metal plaque under the padlock is one very generally used in Corean decoration. The date of the cabinet is probably late, but it is a rare type and as there is no representative of the same class in the museum I thought it would be worth acquiring for the Dept of Woodwork.'

On arrival in the Museum, colleagues from the department of Woodwork were convinced that the two chests could be separated and were identical pieces of furniture, one with a stand and one without. Luckily, however, the pieces were not divided and the complete object along with other items of Korean lacquer can now be seen in the Korea gallery (Room 47g).