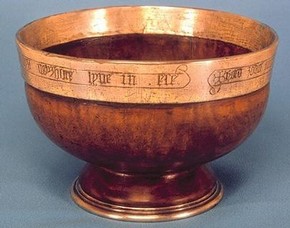 The boss is engraved with the sacred monogram IHC [Jesus]. The mounts are engraved, 'Hold yowre tunge and say ye best and let yowre neyzbore sitte in rest hoe so lustyye God to plese let hys neyzbore lyve in ese' (Hold your tongue and say the best // And let your neighbour sit in rest // He is so eager to please God // He lets his neighbour live in ease). Verses like this, emphasising religious and moral duties, were considered appropriate for drinking vessels as a warning against indulgence.

By the end of the 15th century, mazers were standard, inexpensive drinking vessels. One load of 200 imported into Exeter in 1493 cost only 6 shillings and sixpence. Mazers were turned from maple wood burrs (knots) which were very hard, and had an attractive speckled grain when polished. The name itself derives from the Old German 'masar', meaning 'spot'.