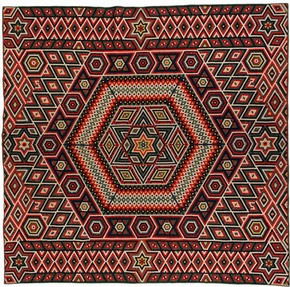 Military or soldiers’ quilts are traditionally made from wool serge or woven worsted twill, used in the production of military uniforms. They are often referred to as Crimean quilts, however, brightness of colour is a key feature of quilts made in India during the latter half of the 19th century.

The colourful and elaborate nature of military quilts proved extremely popular in the mid 19th century; the design arrangements and accuracy of the piercing appealed to the Victorian fashion for highly skilled, colourful and elaborate patchwork. It may come as a surprise to read that The Great Exhibition of 1851 'included more than thirty examples submitted by military personnel.' This large intricately pieced patchwork quilt is made of small hexagons of wool approximately 1.5 cm across, in a motif featuring six-pointed stars and diamonds, backed with green damask. The quilt measures 238.7cm x 238.7cm and is in excellent condition with little sign of pest damage or fading.

Soldiers were encouraged to take up sewing as a valid alternative to the less salubrious pursuits of drinking and gambling; needlework was also used as a form of therapy for those injured in conflict and recuperating in hospital. Unsigned and undated, it was possibly made by Private Francis Brayley, who served in the 1st/11th Foot in India between 1863-1877. From the Muster Rolls Brayley appears to have enjoyed good health until the latter half of 1875 and most of 1876, when he was hospitalised due to ‘Rifle Drill Fatigue’. Brayley may have embarked on his patchwork during this period.