'Neptune and Triton' by Gianlorenzo Bernini 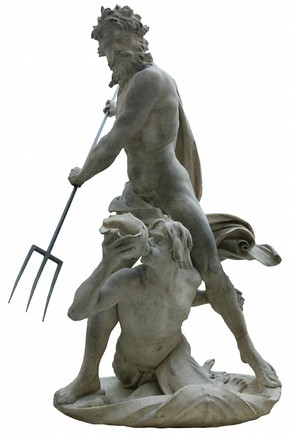 The sculpture and its setting

Created by Gianlorenzo (or Giovanni Lorenzo) Bernini in 1622–3, this marble sculpture depicts the life-size figure of Neptune, who wields his trident in a firm gesture of command, astride the sea-god Triton, who blows on his conch shell to the four corners of the world. The interlocking curves of the two figures, and their aggressive vitality, generate an excitement which also charges details like Neptune's hands gripping the trident and his grimly determined face. Neptune and Triton are commanding the seas, and indeed our first impression of the two figures is that they magnificently dominate the space that surrounds them, the space in which we now have to imagine the waters.

The wind blows Neptune's hair and beard away from his face, and takes up the trailing ends of his cloak into two brisk spirals. To exploit the bright Italian sunshine and create dramatic contrasts of dark and light, Bernini not only aimed at a bold overall design, but also carved the details deeply and vigorously. The arcs of water which once played around the sculpture are reflected in the sculpture itself, both in the swinging curves of the two figures, and in the smaller, more rapid curves of detail like Neptune's beard and the folds of his cloak. Triton's emergence from the waves is vivaciously suggested by the less defined forms of his fin-like legs and his thick locks of hair still heavy with water; originally a jet of water spurted from his conch shell.

The story of Neptune and Triton was even more dramatically told in the original setting of the sculpture, which was surrounded by elaborate fountains and set above waterfalls at the upper end of a large oval pool in the garden of the Villa Montalto in Rome. There, Bernini fully exploited the presence of open air, light, and water. 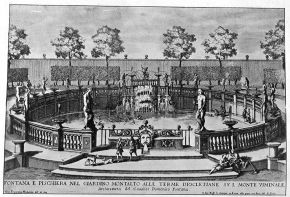 Bernini and the Baroque

It is not only the outdoor fountain setting that explains the appearance of the Neptune and Triton group. Bernini stresses the energetic movement of the muscular figures, deliberately setting the directions of their twisting bodies in opposition to each other. This dynamism is expressive of power and effort, of extreme physical and emotional involvement. Such qualities are characteristic of that style of art which emerged in Rome in the early years of the 17th century, and which spread throughout Italy and much of the rest of Western Europe by 1700. Bernini, in works like the Neptune and Triton, shows himself to be one of the founders of this style - the Baroque.

Bernini was in his early twenties when he sculpted Neptune and Triton, which is the only large-scale sculpture by him held outside Italy. 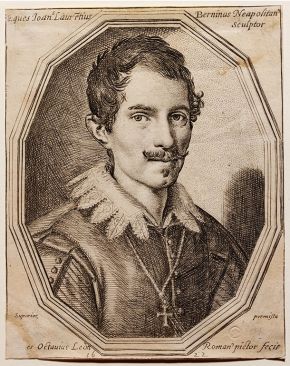 During the same years (1618–24), he produced the famous series of sculptures for Cardinal Scipio Borghese: 'Aeneas and Anchises', 'Pluto and Proserpine', 'Apollo and Daphne', and 'David' - all now in the Borghese Gallery in Rome.

These works, and the Neptune and Triton group, show Bernini reaching full maturity as a sculptor, and already present him as one of the artists of the 17th century.

In 1623 another patron and friend of Bernini, Cardinal Maffeo Barberini, was elected as Pope Urban VIII. This powerful patron encouraged the young sculptor to study painting and architecture, soon appointing him in charge of St. Peter's in Rome, and arranging for him important commissions which were to make him the foremost artist of his day.

The Neptune and Triton was sculpted in marble, except for the trident, which was made of copper, but has since been replaced with a wooden copy. The original base bore the arms of Allessandro Peretti, Cardinal Montalto, so the sculpture must have been commissioned and executed before the cardinal's death in 1623. By 1775 the sculpture had been moved inside the Villa Montalto, and in 1786 it was sold along with other statues to Thomas Jenkins, an English art dealer in Rome, who in turn sold it to Sir Joshua Reynolds for about 700 guineas. Reynolds wrote in a letter that 'I buy it upon speculation and hope to sell it for a thousand', but after his death in 1792, his executors sold it to Lord Yarborough, in whose family it remained until the museum bought it in 1950 with the assistance of the National Art-Collections Fund.

The story of Neptune

Joshua Reynolds thought Bernini had taken the story of Neptune and Triton from a famous episode in Virgil's Aeneid, in which they calm the seas to save the Trojan fleet. But this passage names two gods as accompanying Neptune, who is described as riding on a chariot.

In Ovid's Metamorphoses, there is another story involving Neptune and Triton. Jupitor vowed in anger to destroy life on earth, and called Neptune to create a flood. Neptune struck the earth with his trident and released the deluge. When the destruction was complete, Neptune laid down his trident and called Triton to blow on his conch shell as a signal for the waters to subside.

Neither of the passages from Ovid fit Bernini's sculpture in exact detail, but the emphasis on Neptune's gesture with his trident, and the original presence of the water all round the sculpture, indicate that the sea god is summoning rather than quelling the deluge.