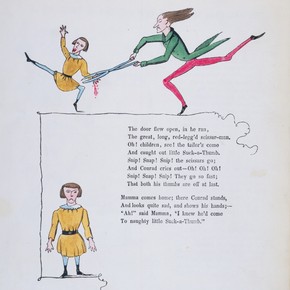 Illustration from 'The Story of Little Suck a Thumb', from 'The English Struwwelpeter', by Heinrich Hoffmann, Leipzig, Germany, 1860-9. Pressmark NAL 60.A.45

Until the mid 1980s, the National Art Library's coverage of comics and comic art was uneven and spasmodic. In the 19th century, illustrated books and children's books were actively collected (as they are today) and some of the classic precursors of 20th-century comics found their way into the collections: books such as Rodolphe Töpffer's L'Histoire Véritable de Monsieur Crépin (Paris, 1837), Adolf Schrödter's Herrn Piepmeyer (Frankfurt, 1848), several 19th-century editions of Heinrich Hoffmann's Struwwelpeter and Wilhelm Busch's Max und Moritz. Individual items continued to be acquired in the 20th century, but the Library's holdings have been significantly enhanced by the acquisition of a number of major collections in recent years.

In 1986 the National Art Library acquired the Krazy Kat Arkive of Twentieth Century Popular Culture, named after George Herriman's strip character. The Arkive consists of nearly 41,000 items amassed since the 1950s by artist Sir Eduardo Paolozzi. It reflected his interest in popular culture, the image of the hero and the iconography of the machine age. The Krazy Kat Arkive includes about 4200 comics: 255 titles from the USA, 157 from Britain, and a handful from Europe and Japan. The great majority of titles are from the 1960s and 1970s. The collection is housed in the Archive of Art and Design.

Another major acquisition was made in 1990, when the National Art Library purchased the Rakoff Collection of Comics, some 17,000 items amassed by the film writer/editor Ian Rakoff. This collection provides a comprehensive tapestry of 20th-century comics, charting their growth from the newspaper strips of the first years of this century to the New Wave comics of the 1980s. The collection consists predominantly of 4-colour American comic books, but examples of other formats and 'national schools' are also represented. Most of the items are original, though some reprints are also included. Read Ian Rakoff’s memoirs on his blog.

Most of the other comics material in the Library is held in the Comics Collection, to which all new comics acquisitions are added. The Library's aim is to create a study collection of contemporary comics, including a selection of works in all formats, representative of major centres of production, of innovative design and art-work, or particularly evocative of some aspect of contemporary life. Material about comics is also collected, as a scholarly back-up research tool.

A large quantity of comics and cartoons is also present within items that are not comics in themselves; for example, in magazines like Punch or The New Yorker or the British Sunday magazines. Other comics material is present among the 80,000 items in the Renier Collection of Children's Books.

Comics in the Krazy Kat Arkive are not yet catalogued, but a hand-list is available on request.

The Comics Collection forms part of the Library's Special Collections. For information on accessing the collections, see National Art Library: Registering for a reader ticket. If you wish to use a wide range of material from the Rakoff Collection, please make an appointment in advance. An appointment is necessary for access to the Krazy Kat Arkive at the Archive of Art and Design.