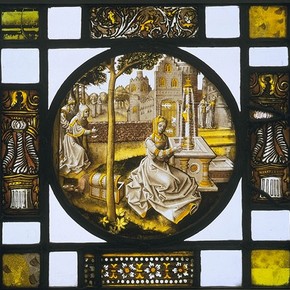 This roundel is formed from a single circular pane of glass. The glass-painter drew the design with a simple brown/black pigment composed of iron filings and ground glass. He then highlighted areas of the design in yellow, in a technique known as 'silver staining'. To do this, he painted a silver compound onto the back of the glass. When the glass was fired, this compound changed colour, in a lemon-yellow to a burnt-orange range depending on its concentration. Silver staining was first used on window glass in Europe in the early 14th century.

The story of Susannah and the Elders forms the 13th chapter of the Book of Daniel in the Catholic Bible. The Protestant churches do not consider it canonical, and thus is not included in their Bible, although it did appear in the King James version of 1611.

Susannah was the righteous wife of Joachim of Babylon, a wealthy man. Joachim permitted the wise elders of the community to use his garden to meet and discuss the legal matters of the land. It was there that Susannah came to the notice of two elders, who hid in the garden until Susannah's maids left to fetch her washing things. The elders threatened to accuse Susannah of adultery if she did not sleep with them. She chose not to sin and refused their advances, so the two elders denounced her in a public assembly. The assembly called for her death, for they did not believe that the elders could lie, because of their age and their position. Susannah prayed to God, who sent the wise young Daniel to arbitrate on her behalf. By separating the two elders and getting contradictory testimony during cross-examination, Daniel was able to demonstrate that they had lied. The assembly then condemned the elders to death, and Susannah was exonerated.

This scene is often displayed in government-related contexts as a reminder to judge wisely and honestly.

In this roundel Susannah is depicted fully clothed, which is the medieval tradition. In Renaissance depictions, she is usually depicted naked.