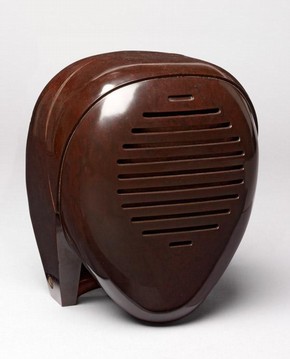 This baby monitor, called the 'Radio Nurse', is one of the earliest examples of the speaker or receiver end of a baby monitor.  It was designed by Isamu Noguchi (1904-1988), a Japanese-American sculptor.  He produced the design in 1937 for the Zenith Radio Corporation, a major American radio manufacturer.  It was originally commissioned by the firm's president in order to monitor his daughter on his yacht.  It is thought that the kidnapping of the two-year-old son of aviator Charles Lindbergh in 1932 may have influenced his decision to commission the piece.

Noguchi designed the Radio Nurse at a time when he was incorporating industrial materials into his sculptures.  Its shape suggests both traditional Japanese Kendo masks and American 'machine age' sculpture of the 1930s.  In 1939 it was displayed at the Whitney Museum of American Art's annual sculpture exhibition, where Time magazine called it the 'most exotic' exhibit in the show, 'prettier as a radio than as a nurse'.

The Radio Nurse is an excellent example of industrial design in bakelite, an early form of plastic, by a major twentieth-century artist.  Noguchi continued to design objects for domestic use and over the course of thirty years he produced a number of successful pieces including lighting, tables, stools and a chair.