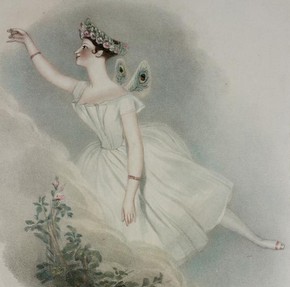 In the early 19th century the Age of Reason gave way to the age of the imagination and the Romantic Movement.

Young artists, writers, poets and dancers wanted the freedom to express themselves in a spontaneous and individual way. Rejecting the classical ideas of order, harmony and balance they turned to nature as a source of inspiration. As people left the countryside and agriculture for the growing urban industries and factory work, the Romantic vision was partly a plea for a return to a ‘natural’ life and partly escapism.

Although most ballets were created by men, the male dancer was no longer an equal star. In the following decades dance became an unacceptable career for a man. Male roles were often taken by women dressing en travestie. Men only appeared in character roles. 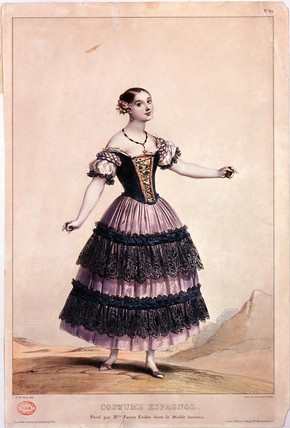 The cult of the ballerina

By the 1840s women had become the great ballet stars and ballerinas wore the familiar bell shaped dress with cap sleeves, low cut bodice and long skirts. If you look at fashion plates of the period you can see that costumes developed from fashionable dress of the time. Ballerinas also learned the art of dancing on the very tips of their toes, known as pointe work. There were no stiffened pointe shoes and dancers darned the toes of their slippers to give additional support.

The great Romantic ballerinas were idolised throughout Europe. Marie Taglioni (1804 - 1884) danced in Paris, St Petersburg, London and Italy and Fanny Elssler (1810 - 1884) even toured North America. The rivalry between Elssler and Taglioni and their supporters was intense although they had very different styles.

Elssler was fiery, exotic and sexy, while Taglioni excelled in creating unearthly, spiritual characters. Theophile Gautier, a ballet critic and an Elssler fan, snidely described Taglioni as a Christian dancer (implying she was rather cold), while he proclaimed that Elssler was a pagan dancer (implying that she was sexy).

One of  Elssler's most famous dances, was the cachucha. Based on the Spanish dance, Elssler's sensual and flirtatous cachucha was the sensation of the
ballet Le Diable Boiteux in 1836. It became her trademark.

Elssler was born in Austria in 1810 and with her sister appeared with the famous Viennese Children's Ballet. At 12, she joined the corps at the Hoftheater under ballet master Filippo Taglioni, and later studied briefly with the famous Auguste Vestris.

On the voyage over she was attacked by a sailor but dealt him such a kick that he died a few days later.

The popular image of the Romantic ballerina as an otherworldly, ethereal being was portrayed in lithographs. These were popular before photography. They showed ballerinas poised on flowers, reclining on clouds and floating through the air. Many ballerinas did perform these feats on stage, but with more than a little help from stage technology. 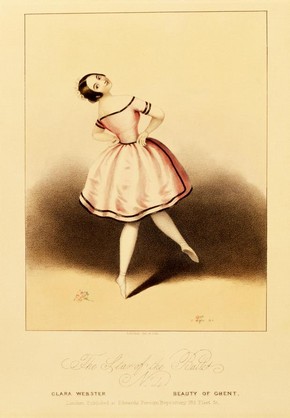 England did not have a national ballet school attached to a major opera house, although several London theatres provided dance training.

The talented Clara Webster (1821 - 1844), who London critics prophesied would be the first great English ballerina, had her career cut tragically short when her dress caught fire on stage.

In the 1840s, Clara Webster was hailed as British ballet's 'most promising star' - the first English dancer talented enough to challenge the popular prejudice that ballet belonged to the French or Italian ballerinas.

In 1844 she was dancing in The Revolt of the Harem at Drury Lane when her dress brushed the flame of an oil-burning lamp on the stage. Her flimsy ballet dress went up in flames in seconds. None of her colleagues dared go near to help and the fire buckets were all empty. Finally a stagehand threw himself on top of her and smothered the flames.

No one thought to bring down the curtain so the audience witnessed the whole event. Clara was carried backstage and an announcement made that her injuries were not too serious, so the ballet continued. She died three days later from her burns. She was just 23 years old. 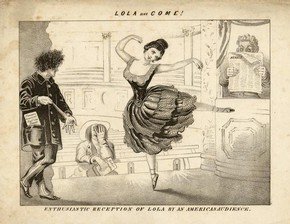 Lola Montez (1818 - 1861) is remembered for her outrageous and flamboyant life rather than for any significant talent as a dancer.

She was born plain Eliza Gilbert in Ireland in 1818. Trading on her dark colouring and exotic beauty, she reinvented herself as a Spaniard and, after only five months' training, launched herself in 1843 as a Spanish dancer.

All London flocked to see her debut, but during the performance one of her rejected suitors shouted 'Dammit! It's Betty James!' after which she lost credibility.

Europe, however, raved. Her admirers included famous authors, among them Dumas and Balzac, and the composer Franz Lizst. By 1847 she was mistress of King Ludwig of Bavaria and virtually controlled his government.

Banished in 1848, she resumed her stage career. In London her appearances were cancelled because she was appearing in court on a bigamy charge. In Australia she horsewhipped the editor of the Ballerat Times. In New York she lectured on the 'Care of the Bust'.

Like many others who led full and rich lives, she later repented of her colourful past and devoted her last years to helping fallen women. 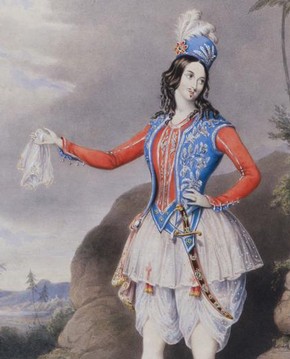 Louise Farebrother (1816 - 1890) starred as Abdullah in Open Sesame, one of the earliest burlesque versions of The Forty Thieves staged in 1844. She was one of only a few performers to marry into the aristocracy, for while many aristocrats took actresses or dancers as mistresses, few would actually commit themselves to marriage.

George, Duke of Cambridge, first cousin to Queen Victoria and Commander-in-Chief of the army was an exception. He fell head over heels in love with Louise and haunted the stage door of the Lyceum Theatre where she was playing.

They lived together for several years then, just before the birth of their third son, they secretly married, in contravention of the Royal Marriage Act, which decreed that members of the Royal Family could not marry without the permission of the sovereign. Queen Victoria eventually approved the marriage. 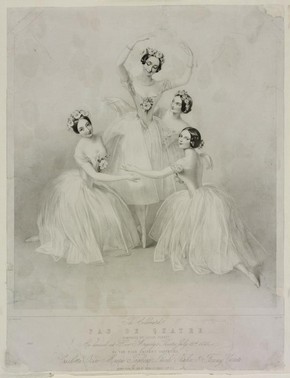 Ballerina and choreographer Fanny Cerrito was born in Naples in 1817. Small and voluptuous, she became the toast of Europe.

Cerrito first danced in London in 1840 in the solo 'La Lituana'. Her debut was delayed several days because of audience riots according to a popular comic poem 'Ma'am'selle Cherrytoes Shook to her very toes, / She couldn't hop on, so hopp'd off on her merry toes'.

In 1845 she performed in the 'Pas de Quatre' as one of the four most popular ballerinas of the day. That same year, Cerrito married fellow dancer Arthur Saint-Léon (thereby breaking aristocratic hearts across Europe).

They separated in 1851and one of those aristocrats, a Spaniard, became her partner with whom she had a daughter. Cerrito retired in 1857 but did not die until May 1909 in Paris, only days before the first performances of the Diaghilev Ballet, which changed dance forever.

The Pas de Quatre which opened at Her Majesty’s Theatre, London played for only six performances. It was an overnight success and became legendary. The ballet was immortalised in a famous lithograph showing the four star ballerinas of the Romanic era.

The decline of Romantic ballet

In 1847, the soprano opera singer Jenny Lind made a sensational London debut. The fashionable London audiences had a new star and lost interest in ballet. 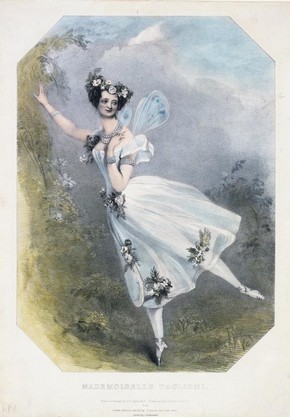 Ballet survived in pantomime, opera and the music halls and by the 1890s ballet was a main attraction on the variety bills at the rival Alhambra and Empire Theatres in Leicester Square.

‘Will that little hunchback ever learn to dance’ mocked Marie Taglioni’s teacher in Paris. Despite being exceptionally plain with very long arms and legs, Marie Taglioni became more than the world’s most famous dancer. Her look became the defining image of the ballerina, poised on the tips of her toes, wearing a long white tutu and a floral wreath, her dark hair parted at the centre and drawn back.

Marie Taglioni was born in Sweden into a family of dancers. She trained in Paris but was not considered talented until her father, Filippo, became her teacher. In 1832, Filippo created La Sylphide to show Taglioni to her best advantage. This supernatural, tragic story with its romantic Scottish setting, combined with Taglioni’s ethereal look, became a defining moment in Romantic ballet. Taglioni became the rage of Europe.

The ethereal image of the sylph was reflected in fashion. Young women often drank vinegar and water to make themselves look pale and interesting.

Marie Taglioni danced the title role in La Bayadère in London in 1831. Her dress was based upon conventional dance dress of the period, but the ballet's Indian setting is clear from the scoop neck, fitted short sleeves, wide belt, pearl droplet head-dress and long earrings seen in this print.

A bayadère is an Indian temple dancer. The 1830s knew little about Indian dance and the movements were based on visual sources such as books or paintings. London did not see authentic Indian dancing until 1838, and even then some spectators preferred Taglioni's 'Indian' dance to the real thing.

Taglioni stands 'en pointe' (on the tips of her toes). There are prints of dancers standing en pointe in the 1820s, but then it was not used artistically but as a technical trick. Taglioni and her choreographer father honed the technique to perfection, making it effortless and an expression of character. To her audiences, she seemed to float above the ground. From now on, point work would be an integral part of ballet technique. 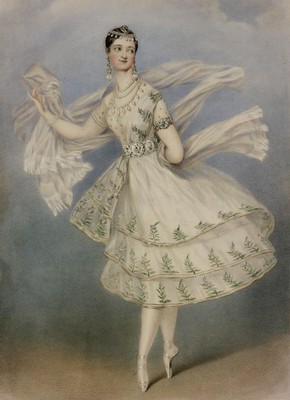 Taglioni became so popular that all kinds of things were named after her. In Russia there were Taglioni caramels, cakes and hairstyles. After her last performance in Russia in 1842, a pair of her ballet shoes was sold for 200 roubles, cooked, garnished and served with a special sauce, then eaten by a group of ballet fans. History does not record whether the shoes had been worn or not.

In England the London to Windsor stagecoach was named after her.

Taglioni retired from dancing in 1847. In 1860 she choreographed her only ballet Le Papillon (The Butterfly) for her pupil Emma Livry. Tragically, in 1863, Emma’s stage costume brushed against a gas jet and caught fire. She later died of burns.

After Marie Taglioni retired from dancing, she went to live in Italy, on the shores of Lake Como. In the 1870s Taglioni moved to London where she taught social dance to children and society ladies. She had no shortage of pupils, many of whom came from the smartest families in London.

She taught ballet to only a few children — social dance was more profitable. Among her pupils was Princess May of Teck, the future Queen Mary, who, for the rest of her life, boasted that she had been taught to curtsey by Mme Taglioni.

As the greatest ballerina of her day, Taglioni had been highly paid and showered with jewels and other gifts from admirers. She never had a particularly extravagant lifestyle, especially compared to some of her peers, but it is thought that much of her fortune disappeared to pay her husband's debts, and so she was reduced to teaching.

In the 18th and early 19th century an international community of professional dancing masters made a living by teaching the upper classes the complicated formations that made up the social dances of the day.

By the mid-19th century however, dancing had become popular over a wider social group and the dances themselves were becoming simpler.

Dances such as the at first  scandalous waltz, the 'Schottische' and the polka could be learnt from a book, thus threatening the livelihood of the old-school dancing masters.