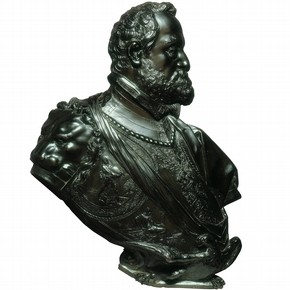 This bronze portrait depicts the Holy Roman Emperor Rudolph II (reigned 1572–1609), one of the greatest patrons and collectors of art of the late 16th century. This portrait was made in 1609 by Adriaen de Vries (about 1545–1626). The portrait was recorded in the inventory made of Rudolph's vast collection (or cabinet of curiosities) in Prague in 1611.

A 'cabinet of curiosities' (or Kunstkammer) was an encyclopaedic collection of natural and artificial objects intended to represent the world in miniature. These types of collection were especially popular among the wealthy of Northern Europe were they were kept in specially furnished private rooms.

Cabinets of curiosities included precious artefacts and specimens from places remote from Europe, such as China and West Africa. These were juxtaposed with examples of natural materials from local sources, worked and mounted to show the artist's skill. 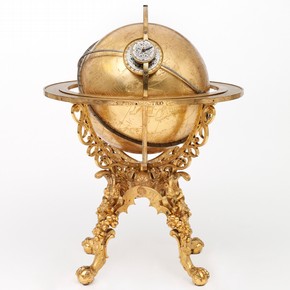 The Archduke Ferdinand I of the Tyrol assembled one of the earliest cabinets at Ambras near Innsbruck in the second half of the 16th century. The collection of the Rudolph II, kept in his castle in Prague, was one the largest ever assembled. Rudolph's collection included a huge number of clocks and scientific instruments. He owned over 60 clocks and 120 astronomical or geometrical instruments. This globe was bought by Rudolph II from one of its makers, Georg Roll in 1584. It demonstrates the movements of the sun, moon and stars, and could also be used to tell the time.

This film about Rudolph II and Prague has been supported by THE BONITA TRUST. This film contains no sound.