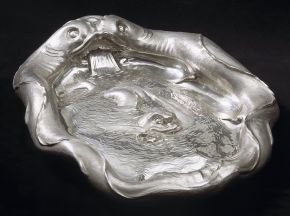 This basin and a now lost ewer were used for rosewater. They would have been brought to the table for diners to wash their hands at the end of the meal. When not in use the basin was meant to hang vertically with the dolphins and the grotesque mask at the top. There are holes at the top from which it could be suspended.

Charles I (reigned 1625–49) was an extraordinarily cultivated man with very refined aesthetic senses, as he came from a sophisticated, international, European background. The van Vianen Dolphin Basin provides an example of the way in which Charles I wanted to bring a fresh look to the English court, and a fresh look to English court silver.

It could be said that the English were not very good at design. There was no design academy until the early 18th century, and goldsmiths had to learn as they could, usually from foreign goldsmiths who came here to work. Although a lot of silver was made and sold in London, the quality of the workmanship and the quality of the design was not good compared to silver from Paris or the other European centres. This meant that sophisticated English patrons - people at court who had travelled and had higher standards - demanded more interesting, foreign silver.

In the late 1620s there was a change in the look of European silver. This change was driven by changing taste, but also engineered by new designs, for example objects created out of one piece of silver and manipulated into extraordinary shapes. The artist Christiaen van Vianen had to first devise the shape and the interplay of the ornament, and then make it. These are two different processes, both equally demanding.

Christiaen van Vianen came to London in 1630 and set up a workshop in Westminster, employing nine Dutch workmen. His was the largest alien workshop in London at a time when there were identifiably about 200 foreign goldsmiths, jewellers and engravers working there. Being a foreigner, he strictly was not allowed a hallmark and he therefore signed many of his pieces. The basin was made in London in 1635, it is signed by van Vianen in French on the back. The basin is made out of one piece of metal, two dolphins' heads meet at the top, their tails coming round to the bottom part of a slide. In the middle, another fish, possibly a dolphin, is eating, catching, and biting a third fish that's struggling and creating waves. The water coming into the basin is not coming out of the dolphins' mouths, but from a mask that has been created by the junction of the two heads. It is possible to see a face in the middle or the two dolphins coming together, this illusionistic, grotesque distortion of the silver is typical of this period of the middle years of the 17th century. The capacity of a goldsmith to dissolve and to confuse the eye by manipulating the metal in this very ingenious way was admired right across Europe, from Prague to Whitehall.