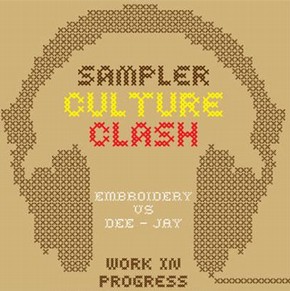 Sampler - Culture Clash is a collaborative project initiated by David Littler, director of the London Printworks Trust, in association with the V&A. It brings the two cultures of embroidery and DJ-ing together to see what might happen when the two cultures clash. The word sampler is common to both cultures, but has different definitions and understanding depending on which culture you occupy.

I have two real passions in life - textiles and music. I have spent my career to date working in both fields, as a textile designer and now as director of London Printworks Trust - an educational textile print charity, based in Brixton, south London. In terms of music as a DJ since I was about 16, growing up listening to northern soul, ska, jazz, funk and hip hop as a youngster in Blackpool and avid crate digger (collector of vinyl records), promoting my own club nights and radio shows.

Very seldom do those two worlds meet. It is very rare that I have a conversation with someone in the textile field about an obscure 70's funk break, or the joys of a piece of 18th century embroidery with my DJ friends. They appear to be very different people with very different cultures. Or are they?

Can you explain the different uses of the term 'sampler'? 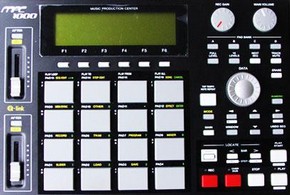 When I ask my dj friends: 'What is a sampler?' they all think of a piece of software or hardware for capturing sound. Usually in their case this means drum breaks and sections from other recordings that can be sampled, spliced and looped to create new music. Examples of hardware include the classic AKAI MPC sampler and new music software such as Ableton Live.

When I ask the same question to colleagues in the textiles field, they usually reply with the definition given in the Oxford English Dictionary:

'a piece of embroidery worked in various stitches as a specimen of proficiency (often displayed on a wall etc). OF essamplaire (as Exemplar)'.

How did the project begin to take shape? 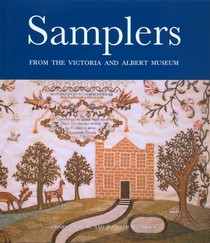 My initial inspiration for the project was the V&A's publication 'Samplers' by Clare Brown and Jennifer Wearden. Whilst reading this book I came up with the idea of bringing together the worlds of embroidery and dj-ing. Would it be possible? Would they sit in the same room? If they were to collaborate, what kind of work would they create?

How did your ideas progress from there?

Last year I was fortunate to receive one the Crafts Council's first Spark Plug Curators' Awards to carry out initial research to develop the idea. This has enabled me to bring together a group of artistic collaborators, comprising embroiderers from the New Embroidery Group and the Embroiderers' Guild, curators Clare Brown from the V&A and Lynn Szygenda from the Embroiderers' Guild, performance poet Yusra Warsama and sound artist, beatboxer, dj and music producer Jason Singh.

Together we have been exploring the connections between each of these art forms using the word 'sampler' both as our starting point and as our shared philosophy for creating new work: to trial, to experiment and to mix things up. Our aim is to push the boundaries of each art form and to create new interdisciplinary work combining stitch, sound, word, pattern and performance.

What are the outcomes of the collaboration so far? 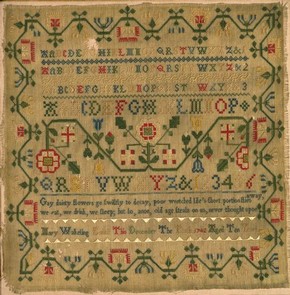 To date we've run a series of exploratory workshops and live 'work in progress' performances, where we've been mixing the stitched word and pattern with the spoken word, turning stitched pattern into sound, and sampled sounds back into pattern and stitch.

What do embroidery and dj-ing have in common? 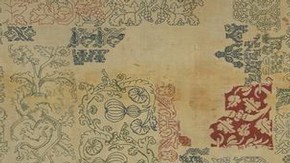 Our starting point for the research has been the embroidered textile samplers from both the V&A's and the Embroiderers' Guilds' collections.

At first there may not seem to be obvious connections between the two worlds of embroidery and electronic music production. But the more you investigate, the closer they become.

A shared language
Alongside 'sampler' there are many words shared by the two forms, such as:

The approach to embroidered sampler-making, particularly in its earlier stages of development, is also very similar to the process of composing electronic music from sound samples. For example:

Spot samplers
'Spot' samplers are created by filling a piece of cloth with trials of patterns, randomly placed to fill any available space to refer back to later when working on a final embroidered design. This process is very similar to building up a library of sound samples stored in analogue or digital format, to refer back to at a later date, and from which to create new musical compositions. 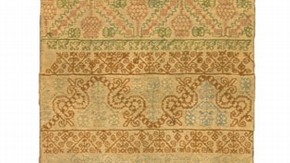 Band samplers
Jason, one of the Sampler - Culture Clash collaborators, commented that 'band' samplers, made up of bands of repeating patterns, were visually very similar to digital music software, where bands of sounds can be repeated and layered. So, for example, a repeating strawberry pattern becomes the base drum beat, rows of dots become the baseline and rows of tulips become the vocals.

Would it be possible to translate or transcribe these patterned designs into sound compositions?

'Thou Shalt Not Steal': the art of copying

Copying has been critical to the development of both music and embroidery. In terms of music, this is particularly the case in ‘hip-hop’ and dance music. In terms of embroidery, motifs such as the Boxer - two male figures holding gifts - re-appear in samplers throughout the 16th-18th centuries, just as the infamous drum break from James Brown’s Funky Drummer has been sampled and used in over 200 other compositions by artists as diverse as Public Enemy and George Michael.

How my interest in the subject has evolved 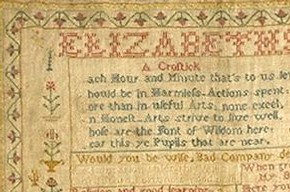 At first I was drawn to embroidered samplers through the stitched pattern. However, I became even more fascinated by the stitched letter and the words within the samplers. The alphabet, religious texts and the moral verses stitched by young girls aspiring to do better unto their families or the Lord, or as in this sampler by Elizabeth Smith, stitched words in order that they could be remembered by future generations:

The incorporation of language into the project

We recorded a selection of these texts, turning the stitched word into spoken word. We then sampled the recordings, chopped them up and re-configured them alongside other sound samples to create new compositions. 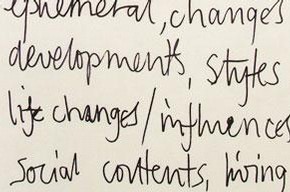 Yusra and the embroiderers have been working together to create new written and spoken pieces informed by these early samplers, using games such as consequences. A number of sound pieces were produced.

Yusra has also created several new poems, including a very moving piece based on the Elizabeth Parker sampler in the V&A’s collection.

Parker’s piece, about her early troubled life, begins with the words ‘as I cannot write’ and ends with ‘what will become of my soul’. Yusra starts and ends her poem with the same words but instead describes the life of a young refugee woman arriving in contemporary Britain, struggling to fit in and find a positive future for herself. 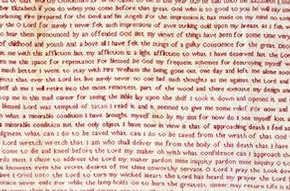 There is an instant connection between Elizabeth Parker’s stitched piece and Yusra’s spoken piece even though they were created centuries apart and with seemingly very different subjects. We’re in the process of turning Yusra’s spoken piece into an embroidery to sit alongside the original.

Listen to spoken word pieces created for this project

In what other ways have you been experimenting with crossovers between these different forms? 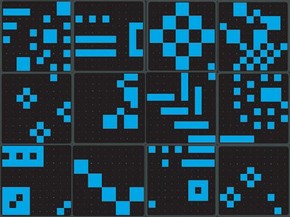 A selection of sampled images created by the sampler collective. Photo: David Littler

Collectively we have been creating new stitched and drawn pattern pieces, from which one of our collaborators, Jason Singh, has been sampling sections and using music software Reaktor to create new sound pieces.

Using pattern as the starting point has been both an interesting and liberating way of composing sound pieces. We have taken the approach of going along with whichever sounds the programme produces, then seeing what we can create as a result. Then, in true sampling style, we have been copying, cutting, looping, repeating, reversing and re-sampling these sounds and combining them with the spoken word pieces to inspire new stitched work.

We’ve also been using player piano machines, more commonly known as music boxes, to translate pattern directly into sound.We’ve taken samples from our collective black and white drawn pattern pieces created on grid paper, then punched holes into the black squares and then fed the paper through the machine. The machine then plays individual notes or chords depending on where you have punched the hole. This is similar to punch card machines used both for jacquard looms and for the early generation of computers.

Watch a demonstration of jacquard weaving 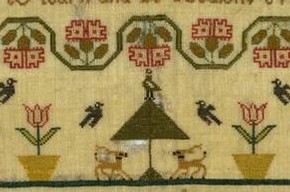 We’ve invited audiences to create their own samplers but by using the components of the original embroideries, such as letters, wordsand motifs such as flowers or crowns.