Sikhism & the city of Amritsar

Sikhism & the city of Amritsar 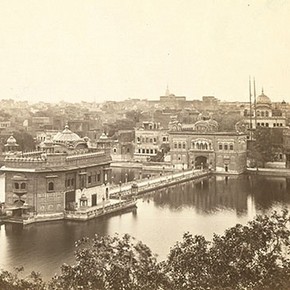 The ten Sikh Gurus taught that there is only one God, who has no form or substance. They opposed idolatry of any kind, and neither the Gurus nor the holy book of Sikhism, the Guru Granth Sahib, are worshipped.

The Gurus could, however, be depicted in paintings. There are no contemporary portraits but in the 19th century they came to be represented with certain attributes that identified them instantly: Guru Gobind Singh, for instance, is usually shown as a majestic figure on horseback holding a royal falcon.

The sacred scriptures of the Guru Granth Sahib were compiled by the fifth Guru, Arjan, in 1604 and the volume was placed in the Harmandir (temple of God) at Amritsar in 1608. The Harmandir was given its present appearance by Ranjit Singh. He rebuilt a monument originally founded in 1588 by Guru Arjan at the centre of the pool of water which gives the city its name (from 'amritsawar', or pool of nectar). Ranjit Singh's Harmandir came to be known as the Golden Temple because of its domes covered with gold, their reflection shimmering in the waters of the pool around it.

Much of the rich visual and material heritage of the Sikhs is virtually unknown. Among the many treasures of Sikh art are illustrated, illuminated and adorned manuscripts of the Guru Granth Sahib, the Sikh scripture. Some of the earliest 17th century manuscripts of the Guru Granth Sahib are adorned with fine illumination or with nisans (benedictions written in the hand of the Guru). Others include both forms of decoration. These early illuminations are usually executed in a style reminiscent of contemporary Islamicate manuscripts, indicating that they were a product of professional book illustrators. [The term Islamicate refers not directly to the religion, Islam, but to the areas of Africa and Asia influenced by Muslim rulers, society and culture.]

Around the middle of the 18th century, the style of adorning manuscripts of the Guru Granth Sahib changed. This was largely due to the introduction into Panjab of large numbers of artists from Kashmir. Some of these were itinerant artists who came down to the plains during the winter and worked hastily on a large number of texts before returning home in the spring, while others were more accomplished painters who were often engaged for years at a time by a single patron. The illuminations produced by these artists differ stylistically from the earlier Islamicate ones, both in their decorative patterns and in the palette of colours used. By the beginning of the 19th century, Kashmiri artists had also begun to illustrate manuscripts of the Guru Granth Sahib, usually with pictures of the ten Gurus on the opening bifolio of the main text.

The practice of illuminating or illustrating Guru Granth Sahib manuscripts died out with the introduction of printing into the Panjab at the end of the 19th century. Only a very few early lithographed or printed texts are known to have had pictures in them. A vestigial trace of the fascinating and almost forgotten practice of adorning Guru Granth Sahib manuscripts survives in the decorated borders of modern volumes of the text.

'Illustrated Sikh scriptural manuscripts' was a lecture by Dr Jeevan Deol, of St John's College Cambridge, given as part of the Sikh Arts and Heritage Lecture Series at the V&A, 6 June 2001.