'An actor needs the voice of an orchestra and the body of a god.'
- Laurence Olivier 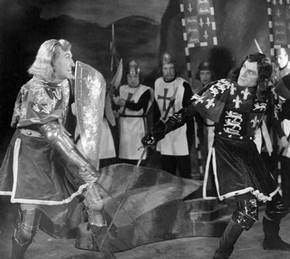 Laurence Olivier (1907-1989) was one of the most famous and revered actors of the 20th century. Along with his contemporaries John Gielgud, Peggy Ashcroft and Ralph Richardson, he played a wide variety of roles on stage and screen from Greek tragedy, Shakespeare and Restoration comedy to modern American and British drama. He was the first artistic director of the National Theatre of Great Britain and its main stage is named in his honour.

Laurence Kerr Olivier was born in 1907 and began acting at school. Witnessing a performance of him in Julius Caesar, the famous Victorian actress Ellen Terry noted in her diary: 'The small boy who played Brutus is already a great actor'.

When Olivier was 17 he auditioned for Elsie Fogerty, founder of The Central School of Speech and Drama, and during his audition she placed her finger on the top of his nose and told him 'You have a weakness here'. Olivier won a scholarship at Central and embarked on decades of wearing false noses, most famously in Richard lll but also any other part that give him the opportunity.

Olivier made his professional debut in Macbeth in 1924 playing Lennox. In 1926 he joined the Birmingham Rep where he played a variety of classical and modern roles including All's Well That Ends Well, Uncle Vanya and The School for Scandal.

After appearing in R.C. Sherriff’s Journey’s End for two performances by the Incorporated Stage Society, Olivier had the opportunity to join the cast for the play’s West End run. Instead he opted for the lead in Beau Geste, an unsuccessful production and the first of seven flops in a row, and it was not until 1931, when Nöel Coward cast him in Private Lives, that he had his first commercial success in London and on Broadway.

In 1937 Olivier led the Old Vic Company season in which he played a diverse range of roles including Henry V, Hamlet, Macbeth, Coriolanus, Iago and Sir Toby Belch.

In 1937 he met the actress Vivien Leigh, they married in 1940 and throughout the 1940s and 1950s they became one the most famous and glamorous couples in showbusiness.

During the war years, Olivier volunteered as a pilot and served in the Fleet Air arm and continued to make films with a patriotic slant which included Lady Hamilton (1941) with Vivien Leigh and The 49th Parallel (1941).

In 1943 Olivier began production on a film version of Henry V. When released the following year it was a worldwide success, and won him an Academy Award for his outstanding achievement as actor, director and producer. Filmed in colour with music by William Walton, the film galvanised Olivier's energy in a patriotic moment that matched the nation's wartime mood.

Time Magazine wrote: 'The movies have produced one of their rare great works of art. The film continually invests the art of Shakespeare with a new mobility and radiance. It extends, illuminates and liberates Shakespeare's poem' 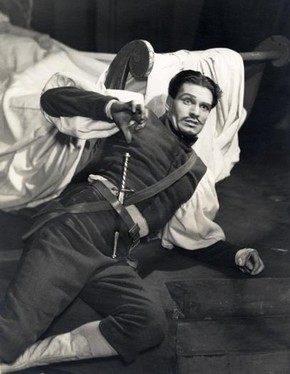 Olivier followed up Henry V with screen adaptations of Hamlet in 1948 (Academy Award for Best Actor) and Richard lll in 1955.

The Royal Court Theatre introduced him to his future (third) wife, Joan Plowright, and relaunched his professional career. In 1957 Olivier witnessed Look Back in Anger at the Royal Court and asked the playwright, John Osborne, to write him a part in his next play. This turned out to be the broken down music hall artist Archie Rice in The Entertainer. Archie Rice was one of Olivier's greatest triumphs and when it opened on 10 April 1957 the play had already sold out. It subsequently transferred to the West End and to Broadway.

Throughout the 1960s, Olivier continued to work in theatre and film and was appointed the first Director for a National Theatre of Great Britain, spearheading the campaign for a building for the company to reside in.

Olivier's performances at the National Theatre at the Old Vic continued to display his now legendary physical prowess with Othello (which was filmed in 1965), A Long Day's Journey into Night, The Merchant of Venice and The Dance of Death. His last appearance on stage at the National was in Trevor Griffith's The Party in 1973.

Throughout the 1970s and 1980s, illness kept Olivier away from the stage but he continued to work in television and film, most famously playing a chilling Nazi dentist in Marathon Man with Dustin Hoffman.

Olivier was made a Baron in 1970 and awarded the Order of Merit in 1981, the first actor in history to receive such an honour. Olivier died on 11 July 1989 aged 82. His memorial service was held at Westminister Abbey and he was only the third actor to be interred there alongside David Garrick and Henry Irving.