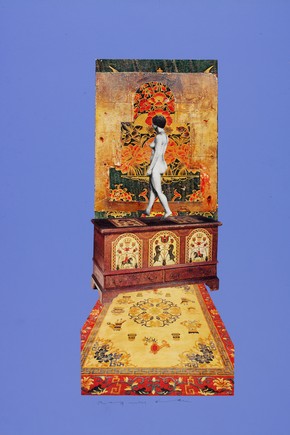 Sonderbehandling (special treatment, Nazi bureaucratic term for killing prisoners), was given to the V&A by the artist, Reginald Case. The collage, from 1978, is part of a series on the theme of the Holocaust. Other pieces are in the Smithsonian Museum of American Art, Washington, the Jewish Museum, New York, Boston Museum of Fine Art, Lowe Art Gallery, Syracuse, and the Israel Museum in Jerusalem, but this is the first in a British collection.

Can art be made in the wake of an atrocity? The philosopher Theodore Adorno declared that to write poetry after the Holocaust was barbaric – though he was later to revise that view:

'Perennial suffering has as much right to expression as a tortured man has to scream; hence, it may have been wrong to say that after Auschwitz you could no longer write poems.'

The artist Reginald Case recalls how growing up in 1940s America, his imagination was disturbed by post-war revelations of the full horror of what had taken place in Europe:

'The Holocaust terrified me as a child, producing violent nightmares… The need to deal with it became obsessive. The need to provide a reminder, a measure of possibility that the human condition or predicament might still include dignity.'

In the late 1970s Case began to exorcise his childhood demons in a series of collages on the theme. Previously known as a painter, he had first come to collage in about 1975. In his early explorations he would project a collage composition onto canvas and paint from it, but eventually the qualities of collage as a medium in its own right led him to abandon the painting altogether, bringing into his reach both formal effects and subject-matter that could not adequately be encompassed by pure painting.

In Case's Holocaust series an emotionally-charged cast of figures – nudes, cabaret performers, or uniformed Nazis from military handbooks – are juxtaposed with delicate flowers and butterflies or with the decorative accoutrements of central European bourgeois interiors. The self-consciously aesthetic arrangement of the visual elements of the compositions sits uncomfortably with the horrors alluded to in the titles or suggested by ominous or ambiguous components in the images without being directly represented.

Dutch art historian Ernst Van Alphen makes a distinction between what he calls 'Holocaust representation' (survivors' testimonies, documentary records and realistic depictions) and 'Holocaust effects' (fragmentary, partial or imaginative treatments) suggesting that the latter have the potential to engage us in a more immediate way:

'A representation is by definition mediated. It is an objectified account. The Holocaust is made present in the representation of it by means of reference to it. When I call something a Holocaust effect, I mean to say that we as viewers or readers, experience directly a certain aspect of the Holocaust or of Nazism, of that which led to the Holocaust. In such moments, the Holocaust is not re-presented, but rather presented or re-enacted.'

'I see my work relating directly to the theatre in that I compose it as if on a stage or in a play. The figures and events as characters and activities performing in a story of some sort … This allows me to partake in the fair or arena of events as a spectator or chronicler … Perhaps not in the sense, necessarily, of the total play but seen as some moment, snapshot or stopped frame ...'