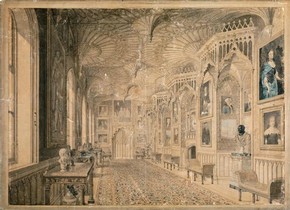 The Medieval Revivals style was inspired by architecture and decorative arts from 1000-1600. The interest in Norman, Gothic and Jacobean styles reflected a romantic nostalgia for Britain's past. This was coupled with an increasingly serious study of actual Medieval buildings and furnishings. The Medieval Revivals style first developed in the mid-18th century. By the 1790s it had become an important alternative to classical styles

The pointed arch, taken from Gothic architectural examples, is the most recognisable characteristic of the Medieval Revivals style. Rounded arches of 11th-century Norman architecture are also used occasionally.

The tracery, or ornamental openwork patterns, found on the windows of Medieval buildings provided an important stylistic element of Medieval Revivals.

Many architectural features of Medieval buildings were used in decorative objects of the Regency period. The clustered columns of Gothic cathedrals, for example, were transformed into candle stands.

Quatrefoils, flower-like ornamentations with four lobes, are a popular decorative feature of the style.

In the late 18th century Medieval Revivals encompassed Jacobean and Baroque styles as well as those of the Middle Ages. This influence can be seen in furniture, where the wood is elaborately turned or carved into spiral-twist forms.

Horace Walpole was the youngest son of Sir Robert Walpole, the first British Prime Minister. He also entered politics, but devoted most of his time to his artistic, architectural and literary interests. Walpole was a great advocate of the Gothic style and his love of the Medieval was reflected in his own home, Strawberry Hill, and in the important collection he amassed. In 1764 he published the first Gothic novel The Castle of Otranto. Set in a labyrinthine Italian castle this tells a fantastical and frightening story intended to excite the imagination.

James Wyatt was one of the leading architects of his day. He worked in a number of styles, but it was his Medieval Revival designs that brought him most fame and notoriety. Wyatt combined the use of accurate details adapted from Medieval churches with picturesque effects designed to stir the emotions. His most famous buildings were Fonthill Abbey and Lee Priory, one room of which can be seen in the V&A Britsh Galleries. Wyatt also restored a number of important Medieval cathedrals, including those at Durham and Salisbury, but his schemes often caused controversy and earned him the nickname 'Wyatt the destroyer'.

Thomas Rickman was a church architect. His great importance to the Medieval Revivals style lies not in his designs, however, but in a book he published in 1817. An Attempt to Discriminate the Styles of Architecture in England, from the Conquest to the Reformation methodically describes architectural features such as windows, doors and arches as they appeared at different times in the Middle Ages. The chronology and terminology Rickman devised - Norman (1066-c.1190), Early English (c.1190-c.1300), Decorated (c.1300-c.1390) and Perpendicular (c.1390-c.1540) - was rapidly adopted and is still in use today.

Strawberry Hill in Twickenham, Middlesex, was the home of Horace Walpole. In 1753 Walpole set about turning it into 'a little Gothic castle' with the help of amateur architects John Chute and Richard Bentley and later two professionals, Robert Adam and James Essex. The overall character of the designs was very theatrical, but at Walpole's insistence all the features of the house - such as the traceried bookcases, the carved woodwork, the canopied alcoves and fan-vaulted ceilings - are based on specific Medieval sources.

Fonthill Abbey in Wiltshire was built in 1796-1812 by James Wyatt for William Beckford, one of the richest men in Britain. Fonthill was a romantic vision of a Medieval monastery. It was a vast cruciform structure with long galleries and an octagonal central hall surmounted by a vast tower 83 metres in height. In 1825 this tower, which was structurally unsound, collapsed taking much of the building with it. Today only a fragment survives.

Windsor Castle is the world's largest Medieval castle, dating back to the time of the Norman Conquest. Windsor is also the greatest example of the Medieval Revivals style having been completely altered and enlarged by Sir Jeffrey Wyattville between 1824 and 1840. Wyattville raised the height of the Round Tower, added turrets, towers and battlements and remodelled the interior.

The increasingly serious study of the art, architecture and design of the Middle Ages that first started in the 18th century led to the development of the later Gothic Revival style. Gothic Revival was characterised by bolder forms and brighter colours than Medieval Revivals. It also had social, religious and moral concerns that went beyond the appearance of objects.