'The Anti Room of the Mae Queen', installation by Simon Periton 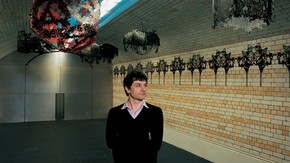 Simon Periton with his work 'The Anti Room of the Mae Queen', for the V&A's tunnel entrance

In his work for the Tunnel Entrance of the V&A, The Anti Room of the Mae Queen, Simon Periton (b. 1964, England) creates an intricate chamber, a space in which an icon of Golden Age cinema merges with the pagan figure head whose festival marks the end of the old and the moment to usher in the new.

Over the past decade Simon Periton has been mainly making cut out paper pieces (sometimes referred to as 'doilies'). He draws inspiration and borrows imagery from diverse sources, including Punk, art history, the landscape, flora and fauna, occultism, politics and religion. The edge to his subject matter sits in sharp juxtaposition with the delicacy and decorative quality of the work. 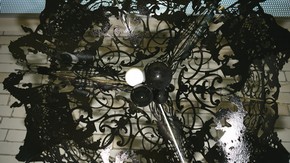 Detail of Simon Periton's installation 'The Anti Room of the Mae Queen', in the V&A's tunnel entrance

In the two dimensional works, there has always been a sculptural element and in recent years Periton has worked on a number of architectural interventions for the Home Office and Channel 4 amongst others, as well as a previous commission for the V&A's 150th anniversary.