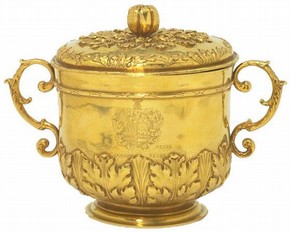 This cup is one of only eight two-handled cups in gold surviving from the reign of Charles II. Jacob Bodendick, a leading German-born goldsmith, was under the personal patronage of the King. The cup is engraved with the arms and motto of Sir William Bowes (1657-1707) of Streatlam Castle, County Durham, and his wife, Elizabeth Blakiston of Gibside. To find a full set of hallmarks on gold is very unusual. The explanation is probably that as a foreign goldsmith, Bodendick was anxious to satisfy the Goldsmiths' Company. In 1675 there were many complaints about plate of low standard gold and silver. Because gold does not tarnish, the cup retains its crisp and delicate tooling.

The Bowes cup was probably a race prize. As early as 1607 gold was offered as prizes and in the 1640s the City of Salisbury owned a pair of gold spurs, given as a race prize by the Earl of Pembroke. In 1695 Sir William Bowes, a Northern magnate and successful breeder of race horses, proposed to the Bishop of Durham that money be raised to buy trophies and plate to be raced for on Durham Moor. A cup of gold with the Bowes arms and crest would have been a lavish but appropriate prize, perhaps won at a race meeting in County Durham.