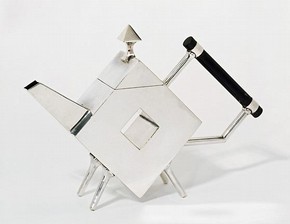 Christopher Dresser (1834-1904) was one of the most talented British designers of the nineteenth century, and these teapots are rare survivals of the radical work he produced at the very peak of his powers.

Dresser was an industrial designer before the profession had been invented, a man who found new ways of designing for production that few of his contemporaries could have imagined. He grasped both the properties of materials and the processes of production and adapted his designs and aesthetics to them brilliantly.

Dresser worked for a large and varied number of manufacturers and created designs for silver plate, cast iron, furniture, ceramics and glass, as well as textiles, carpets and wallpapers. 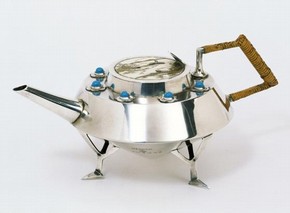 The teapots epitomise how innovative he could be and reveal his principles of design extended to their most extreme conclusion. It is to these designs, along with a select group of others developed in 1879, that Dresser owes his posthumous reputation as a major figure in British industrial heritage.

Some now view his metalwork, with its strikingly rigorous and stark forms, as an astonishing prefigurement of the Modernist designs of the Bauhaus, but his style is probably better understood as an extreme version of high Victorian aestheticism.

The design of Christopher Dresser

Dresser's interest in Japanese design can be seen in the ebonised finish and unusual combination of vertical and diagonal uprights in the back of this chair. It was part of a collection of furniture sold through the Art  Furnishers' Alliance, founded in 1880 to promote Dresser's work.

In the audio below the designer Tom Dixon discusses Christopher Dressers' work using the example images at the foot of the page.

I'm Tom Dixon, I'm Head of Design at Habitat, I spend a lot of time with designers commissioning designs, I'm also a practising designer and manufacturer. Part of the reason I find these pieces appealing is I myself tend to take influences from a variety of eclectic sources and that's what Christopher Dresser has achieved. What we have here is somebody who's interested in everything, he's interested in engineering, he's interested in design, he's interested in decoration and many cultures and it's all reflected within the work. I mean the chair, I can spot maybe five or six influences that go from classical to tribal. Well I like the fact that it's got decorative elements, but they're very much incorporated into the structure, I mean, they come at points where there's a change in direction or a joint and they're extremely restrained for the time.

To the left of the chair you see an earthenware set of one jug and two cups that are sitting on their own tray. Now people, you know, who are designing these days are almost embarrassed of decoration, what's quite nice here is that it's almost like it could be functional, it comes at the point where he'd probably place your hands, and they're very nicely proportioned and they look like it could even pour properly. Directly below the jug and cup set we find a very heroic vase like object, I mean, here's an object that is very hard to tell whether it's contemporary or, you know, five hundred years old, so there's something that's very successful about this which is its timelessness. I feel that really, with somebody who's got so much knowledge and so much interest in various styles, I'd find him very useful in-house at Habitat today. 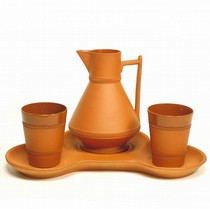 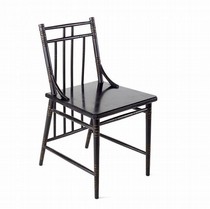 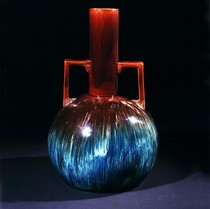