'The Importance of Being Earnest': Costume design 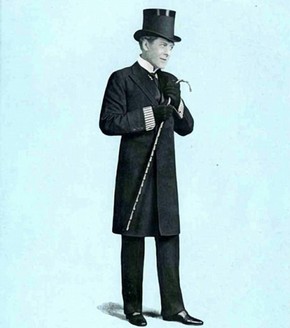 George Alexander as Jack Worthing ('The Importance of Being Earnest'), from 'The Sketch' magazine, London, 1895. 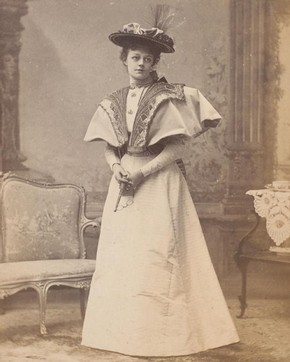 Irene Vanbrugh as Gwendolen Fairfax ('The Importance of Being Earnest'), by Alfred Ellis, publicity photograph from the first production, London, 1895. Museum no. S.149:381-2007

Society drama at the fashionable theatres was a mirror to the audience watching the play. In the 1895 production the costumes reflected the period and class of the characters. Actors employed by producer George Alexander were contractually required to dress in an appropriate manner off-stage as well as on.

For men, sharply tailored morning suits and silk cravats were in vogue, hats and gloves were worn at all times when outdoors. Light-coloured flannel suits became increasingly fashionable during the 1890s, worn especially during the summer months. This is reflected in Act ll, with Algernon wearing a matching tweed suit with hat and gloves when he visits the Manor House.

Female clothing of the 1890s tended to fall into two categories: tailored suits and ball dresses, reflecting the way of life for the upper classes. For these women, the period was dominated by ‘leg of mutton’ sleeves and the growth of the flared skirt which grew to its widest extent in 1895 when they were known as ‘the bell’, ‘the fan’ and ‘the umbrella skirt’. In an essay on costume of the period James Laver remarks:

'It is impossible to put a photograph of a fashionable woman of 1895 beside a photograph of a lamp of the same period without being struck by their close resemblance in every detail. The unmistakable sweep of the Art Nouveau line was completely parallel in the dresses of the time, in particular by the fall and swirl of the skirt.'

New society dramas often premiered at the beginning of the London season, and women would wait until they saw the fashions worn by the female characters in the play before they ordered their new gowns and hats. The following contemporary descriptions of the production’s costumes reflect the luxury of the women’s outfits.

As the Right Hon. Gwendolen Fairfax , Irene Vanbrugh is 'dressed in pale ecru silk with narrow horizontal lines of a deeper tone all through it. Miss Vanbrugh’s skirt is quite plain and hangs in full pleats from the waist. Over a simple bodice of the ecru striped silk she wears a round, waist-deep cape of periwinkle blue, that falls stiffly and without folds from a deep pointed yoke of silk, edged with old gold satin. The cape is lined in pale amber satin. In front, broad revers of gold satin turn back smartly from the bodice, revealing the usual drooping Parisian box-pleated bodice and having a broad full collar of periwinkle velvet.'

Rose Leclercq as Lady Bracknell wore a costume which 'comprises long skirts of chestnut-brown velvet which rustle amply and gracefully about her tall figure. Over her shoulders is thrown a deep, full cape of the same rich velvet, lined throughout with white satin and having a narrow border of sable from which hangs a half yard deep flounce of beautiful cream-white lace. On her exquisitely coiffed head Miss Leclercq wears a bonnet, consisting in front of two broadly spread and stiffened bows of black lace, radiating from a centre of a clump of pink roses, from which rises a tall and stiff feather'.

From 'The Importance of Being Earnest: The First Production', edited by Joseph Donahue and Ruth Berggren, Colin Smythe Ltd, 1995.